In the waning hours of the legislative session, state lawmakers gave up trying to find a way to protect peoples’ privacy from drones and other “emerging technologies” while not interfering with the First Amendment rights of photojournalists, private investigators and others who rely on cameras for work.

HB 15-1115 was killed Tuesday evening at the request of one of its sponsors, Sen. Kevin Lundberg, R-Berthoud. Although the Senate had altered the House version of the bill – removing language that criminalized the photographing or recording of someone who has a “reasonable expectation of privacy” – Lundberg said the language still wasn’t right after 28 amendments.

“In trying to strike that balance between allowing the use of these image-capturing and sound-capturing devices and respecting the privacy of individual citizens, we haven’t gotten there,” he said. 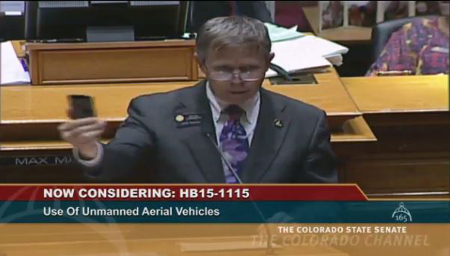 Rep. Polly Lawrence, R-Littleton, introduced the bill to address privacy concerns after a constituent complained about a drone hovering over the backyard of her home. While those privacy concerns remain, the legislature’s various attempts at finding a solution created other concerns.

Rep. Daniel Kagan, D-Cherry Hills Village, sounded an alarm when the House Judiciary Committee that he chairs and then the full Colorado House (on a 60-3 vote) endorsed a version that created a class 3 misdemeanor for “knowingly and intentionally” photographing or otherwise recording another person without consent in situations where that person has a reasonable expectation of privacy.

“That is a law too far, a crime too broad,” Kagan said, echoing concerns expressed by the Colorado Press Association and the Colorado Broadcasters Association that the bill didn’t adequately define conditions under which a photographer potentially could be prosecuted.

The Senate Local Government Committee agreed, amending the bill to remove the criminal penalty and allow for a civil action instead. But Ryan Johnston, president of the Professional Private Investigators Association of Colorado, said the rewritten measure might still pose problems for private investigators who make recordings or take photographs while doing their jobs.

Insurance companies, which increasingly use drones to photograph hail damage and other weather-related claims, also were concerned about their liability under the bill.

Attorneys for the press association and the broadcasters association questioned whether a bill is necessary because private tort claims already exist for intentionally intruding “upon the solitude or seclusion of another.”