Privacy concerns posed by drones and other emerging technologies prompted initial passage in the Colorado House on Friday of a bill that would make it a crime to photograph or record someone who has a “reasonable expectation of privacy.”

“If you’re going to use (a recording device) in an abusive way to invade someone’s privacy, I am not going to stand for that,” said Rep. Polly Lawrence, the Littleton Republican who introduced HB 15-1115. “And that’s what this bill addresses.”

As amended, the measure would create a class 3 misdemeanor for “knowingly and intentionally” photographing or otherwise recording another person without consent in situations where that person has a reasonable expectation of privacy.

Both the Colorado Press Association and Colorado Broadcasters Association are concerned the bill doesn’t adequately define the conditions under which a photographer potentially could be prosecuted. The Professional Private Investigators Association of Colorado has similar concerns (all three organizations are CFOIC members).

“I really have to listen to a First Amendment argument,” said Rep. Su Ryden, D-Aurora, speaking against the bill. “I feel it’s premature and that we need more discussion before we put a new crime into our statutes.” 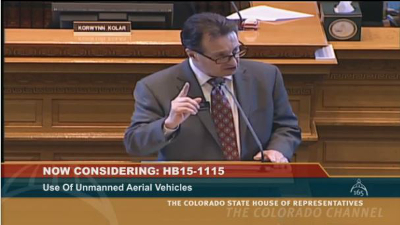 Rep. Daniel Kagan, who argued against HB 15-1115 during a House Judiciary Committee hearing, was again the most vocal opponent of the bill. The Cherry Hills Village Democrat said that taking a photograph of someone who has a reasonable expectation of privacy should possibly be a civil offense, but not a crime.

Kagan noted that, appropriately, it’s already a crime to photograph someone’s private parts without consent when that person is in a private situation. “But when you’re taking a photograph of somebody throwing a frisbee for their dog in their backyard, which is fenced and they have a reasonable expectation of privacy, yeah, it’s annoying, but let’s not make it a crime.”

The bill, Kagan said, “leaves it up to juries and prosecutors to decide whether you have a criminal record for life because you took a picture of someone without their consent under circumstances where they had a reasonable expectation of privacy. That is a law too far, a crime too broad.”

Calling Lawrence’s bill ‘very forward thinking,” Rep. Joe Salazar, D-Thornton, noted that common law already allows for tort claims for invasion of privacy. A criminal statute, he argued, would discourage people – “and we know there’s a lot of sick individuals out there” – from using high-resolution cameras on drones and other devices “to peer upon a person who has a reasonable expectation of privacy.”

“We should criminalize that conduct.” Salazar said.