The first official organizational meeting of the Colorado Freedom of Information Council was held on August 3, 1987. The group used the Wisconsin FOI Council as a model. Original objectives were to monitor legislation, be vigilant in the judicial arena, educate the public and targeted audiences about FOI issues and rights, meet quarterly, establish a hotline, and monitor open meetings/open records violations. 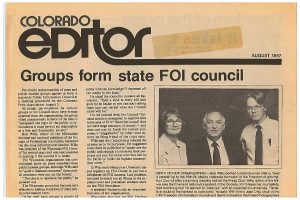 A second organizational meeting was held on September 24, 1987. The bylaws were adopted and the dues structure established. At the second meeting a concern was expressed that the Council membership have a good mix of press/public members, which the Council worked to maintain.

From its inception, the Council subsisted on modest dues paid by members and the work of a network of volunteers. Because of limited resources, its activities were limited primarily to sponsoring community forums, presenting annual awards to leading open-government advocates in Colorado and providing briefs or testimony in court and before the Colorado General Assembly.

In 2012, the Council decided to pursue a more ambitious educational and advocacy mission dedicated to protecting the public’s right to know. Citizens’ rights of access to government meetings, public records and judicial proceedings in Colorado have suffered in recent years in part because the resources of the news media — the traditional defenders of these rights — have diminished with the online transformation of their industry. To help fill this void and make CFOIC a comprehensive resource for all FOI matters in Colorado, the leaders of the Council applied for and received tax-exempt status and began a fundraising effort.