A legislative committee on Tuesday tabled a bill originally intended to regulate drone use after a lawmaker raised concerns that the latest version could make photography a crime in many circumstances.

Rep. Daniel Kagan, the Cherry Hills Village Democrat who chairs the House Judiciary Committee, asked if the news industry had been consulted about a proposed amendment to HB 15-1115 that would make it a class 1 misdemeanor to record or photograph someone when he or she has “a reasonable expectation of privacy.”

“If I take a photograph of a person in circumstances in which the person has a reasonable expectation of privacy, I am now a criminal,” Kagan said. “That strikes me as an extraordinarily dangerous law to pass.”

“To criminalize photography?…The only thing standing between any photograph and a criminal act is, did or did not that person have a reasonable expectation of privacy? That’s how I read this bill.” 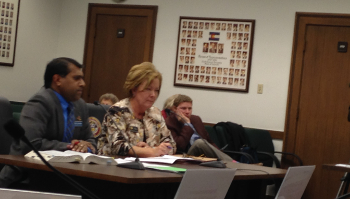 Rep. Polly Lawrence, the sponsor of HB 15-1115, said she plans to rework the amendment and run it by various stakeholders before the House Judiciary Committee takes it up again.

The language discussed Tuesday came from the Colorado District Attorneys’ Council. It was completely different than the original bill, which would have expanded the definitions of harassment and trespassing to include the use of unmanned aerial vehicles to track someone’s movements or to capture a person’s image when that person has a reasonable expectation of privacy.

Lawrence, a Littleton Republican, said she realized it didn’t make sense for legislation to single out drones because “that’s not the only technology that can be used to invade somebody’s privacy.” She said her intention is to address “what is an issue today and will continue to be an issue, which is privacy in our own homes and privacy in places where we have a reasonable expectation (of it).”

Kagan also expressed concern that the proposal would have been a more serious offense under the law, a class 1 misdemeanor, than knowingly photographing another person’s “intimate parts” without his or her consent. That is currently a class 2 misdemeanor.

Wrap-up: Transparency takes a hit in the 2018 session of the Colorado legislature