Lawyers for Colorado Legal Services told the state judicial branch’s Public Access Committee on Friday that the automatic masking of electronically filed court documents is impeding their efforts to evaluate civil claims against potential clients – people who seek their help because they can’t afford to hire an attorney.

“We have not been able to make quick, prompt decisions as to whether or not we can dedicate our resources to providing services to people who really need it,” said supervising attorney Jose Vasquez.

To assess a case, Vasquez said, lawyers need to read “basic” but important documents like the summons, complaint and any exhibits that may be attached. But in county courts throughout the state, except in Denver, those e-filed documents often are flagged as “protected,” meaning they are visible online only to the attorney of record, not to other attorneys and the public.

The system is set up that way to protect electronic court records that might contain sensitive personal information such as Social Security numbers or driver’s license numbers. The protected status is lifted for individual documents after someone in the public makes a request and a clerk goes through the documents and redacts any information that isn’t supposed to be revealed.

“The fact that attorneys and others cannot get immediate access to these documents is, in my view, antithetical to the tradition that court records should be open and available to the public,” said Paul Chessin, a former senior assistant attorney general who volunteers for Colorado Legal Services. 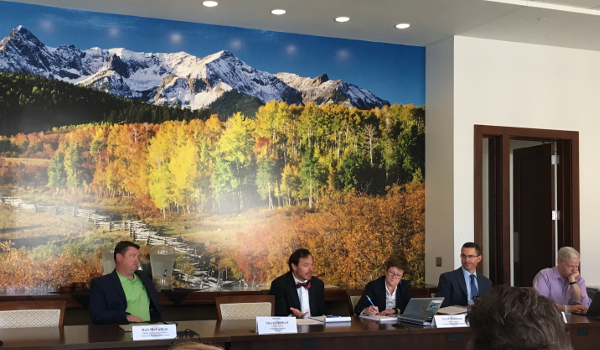 Michelle Webster, manager of research and policy analysis at the Colorado Center on Law and Policy, said most other states require attorneys to redact sensitive information from documents before they e-file them with the courts. The federal courts have a similar rule, said Colorado Court of Appeals Judge Jerry Jones, who chairs the Public Access Committee.

Jones said he appointed a redaction subcommittee last year to look at whether Colorado should adopt such a policy but it couldn’t reach a consensus. He revived the subcommittee Friday and asked for help from a variety of attorneys who use the e-filing system and those affected by the access problem.

Meanwhile, state court administrator Chris Ryan said his office is changing how the court system’s computers are programmed so that not all case types are subject to the same protection rules. But the coding changes aren’t a panacea, he added, and policy decisions still are needed to address “how to provide meaningful public access to our electronic records statewide.”

“Records should not be less accessible in electronic format than they were in the paper world,” Ryan said.

Ryan also updated the Public Access Committee on how the court system is addressing case suppression issues brought to light this summer by Denver Post reporter David Migoya. His stories revealed that thousands of civil and criminal cases have been hidden from public view, usually because judges agreed to suppression requests from prosecutors or defense attorneys.

When court system computers were programmed two decades ago, Ryan said, sealed and suppressed cases were treated the same, even though some information about suppressed cases should have been publicly available.

“We have worked on re-programming all of that so that information now is flowing accurately out to those terminals, at least from our end,” Ryan said. He added, however, that one of the court system’s data vendors is still figuring how to display the information on its system.

Ryan said related questions also need to be addressed, such as when and how suppression orders are reviewed so that “it’s not something that’s going to slip through the cracks after an order is issued and no one is revisiting it.”

Jones said a subcommittee is examining the court system’s policies on sealing and suppressing cases and records, but he’s had a difficult time finding judges to serve on it.

Jones has said in the past that the subcommittee will review a proposal made by the Colorado Freedom of Information Coalition to set a uniform standard for sealing criminal court records in Colorado.

A big helping of open-government resources