A proposal to cap the amount Colorado governments can charge for public records at four times the state minimum wage won preliminary approval in the state House of Representatives on Friday.

HB -14-1193, as it was amended by the House Local Government Committee earlier this week, passed with no floor debate. Rep. Joe Salazar, the Thornton Democrat who introduced the bill, did not try to restore language saying that research-and-retrieval fees for records “must be nominal” compared with the time spent by records custodians responding to requests.

The “nominal” term in the original version of HB 14-1193 was intended to codify a 2003 decision from the Colorado Court of Appeals on how much the public should have to pay for records. But that “controversial element,” as Salazar described it, was deleted because of opposition from the Colorado Municipal League, the Special District Association of Colorado and other governments. 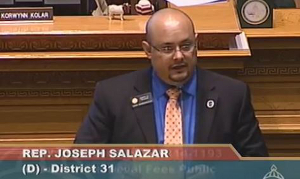 With the state minimum wage currently at $8 per hour, the maximum rate a government could charge to research and compile requests for records would be $32 per hour. But the overall charge – a function of hours multiplied by the hourly rate – must still be “nominal” because case law still applies, according to media-law attorney Steve Zansberg, president of the Colorado Freedom of Information Coalition.

“Nominal” has been defined in case law as “trifling, especially as compared to what would be expected.”

The bill, as it stands, “allows the status quo, whatever that may be, to remain in place,” Salazar told fellow representatives on the House floor.

The Colorado Open Records Act (CORA) currently says nothing about how much local governments and the state can charge to research and compile public records that are not criminal-justice records. Fees can vary significantly among jurisdictions. Many state agencies charge $20 to $30 per hour to process records requests, and some don’t charge for the first hour or two. Some local governments have charged more than $100 per hour.

Salazar’s legislation also prohibits governments and agencies from charging for public records without first publishing their fee policies on the Internet or in some other form.

The bill mandates the purging of most video and still images after three years. However, access to the images would be restricted after the first year unless they are shown to be needed as evidence in felony criminal proceedings or civil, labor or administrative proceedings.