Happy birthday to us – and a shout-out to some of Colorado’s original freedom-of-information fighters.

Led by Jean Otto, the Rocky Mountain News’ editorial page editor and a passionate First Amendment advocate, the group settled on a mission: “To safeguard the right of the public to information it must have to act responsibly in a free and democratic society.” 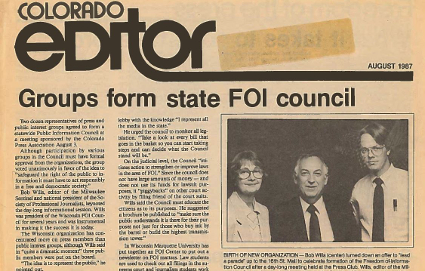 “The idea is to represent the public,” Milwaukee Sentinel Editor Bob Wills told the gathering. He was there to explain how Colorado could replicate the Wisconsin Freedom of Information Council, which monitored and challenged violations of his state’s public information laws.

Here’s how a news release about the newly formed Colorado council described the need: “In many cases, the public and the press have been frustrated in their efforts to get information. Sometimes officials are uninformed. Sometimes they find ways to obfuscate the law. They intimidate people uncertain about what their rights are.

“The FOI Council is designed to be a remedy, for the public and the press.”

The all-volunteer council would become Colorado’s FOI watchdog, operating mostly under the radar for the next 26 years as it monitored violations of the open-records and open-meetings laws, commented on proposed legislation, educated the public and honored open-government champions. (Four years ago, after applying for tax-exempt status, the CFOIC raised some money and hired me as its first executive director. My job: expand the mission by working every day on open-government education and advocacy.)

Kelley, still a board member, led the CFOIC for 17 years until Zansberg’s election as president in early 2014. The record for longest board service – by far – is held by Ruth Anna, a public relations executive who stepped down late last year after representing Colorado Press Women since 1988. She was the CFOIC’s treasurer for many years.

Otto, who passed away in 2011, founded the First Amendment Congress (a coalition of journalism organizations) and was the first female president the national Society of Professional Journalists. The CFOIC’s Friend of Freedom Award is named for her.

In the late 1980s, having collected numerous citizen complaints about local government secrecy, the council was part of an effort to extend Colorado’s open-meetings law to city councils, county commissions and other local public bodies. In 1991, the legislature passed Senate Bill 33, which did just that.

This year, the CFOIC worked with governments and other organizations to develop and promote Senate Bill 17-040, clarifying the public’s right to obtain digital public records in useful file formats. That legislation goes into effect Aug. 9.

The FOI hotline envisioned by the founders of the council is busier than ever. Since late 2013, the CFOIC has fielded nearly 1,450 freedom-of-information questions from journalists, members of the public and people in government.