A bipartisan bill in the Colorado legislature is aimed at stopping “predators” who trick homeowners into paying exorbitant fees for copies of their deeds.

County clerks generally charge $1.50 or less for a copy of a deed or a deed of trust. But many senior citizens, in particular, are getting official-looking letters in the mail telling them they need to purchase copies of their property deeds for as much as $82.50 apiece.

House Bill 18-1154, which passed the House on a preliminary vote Monday, would require anyone seeking to charge a fee for copies of deeds to first show the advertisement or solicitation letter to the county clerk and recorder. The measure prohibits charging more than four times the copying fee set by the county clerk who maintains the public records. 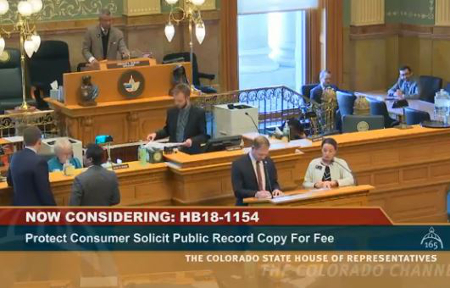 Rep. Edie Hooten, a Boulder Democrat, said county clerks and district attorneys are getting questions and complaints from people who receive “predatory mailings” that claim to come from from the “local records office” or the “deed processing office.” Often, there is a deadline for compliance.

The letters generate “confusion among property owners and a belief that they are required to comply,” Hooten said.

“These records, they belong to the taxpayers,” said Rep. Kevin Van Winkle, a Highlands Ranch Republican who is sponsoring the bill with Hooten. “The taxpayers own them so it’s not right or just that they are being scammed out of lots of their money in order to obtain those records.”

HB 18-1154 also would require the solicitations to say, in at least 24-point type, that they weren’t sent by a state or local government agency and that homeowners are not legally required to buy copies.