The Colorado Freedom of Information Coalition honored state Sen. John Kefalas on Friday for his work in the legislature to expand Coloradans’ access to public records.

CFOIC President Steve Zansberg presented the Fort Collins Democrat with the Sue O’Brien Award for Public Service, which recognizes a person in government who demonstrates a sustained commitment to increasing government transparency. The award is named for the late Sue O’Brien, who served as press secretary for Gov. Dick Lamm, campaign manager for Gov. Roy Romer and editorial page editor of The Denver Post.

Also honored Friday was Ruth Anna, a member of CFOIC’s board of directors for nearly 30 years. 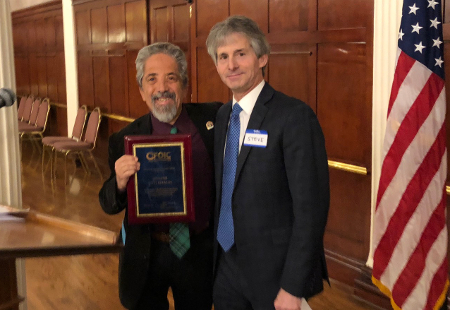 Zansberg lauded Kefalas for a two-year effort that led to the passage in 2017 of Senate Bill 17-040, which ensures that digital public records are available to Coloradans in useful file formats so that government records can be analyzed and better understood. Kefalas also successfully sponsored a bill that capped research fees for Colorado Open Records Act requests. Another measure requires that digital public records be emailed to requesters so they don’t have to drive long distances to pick them up.

The “proper view,” he said, “is that there ought to be an apostrophe and an s in the statute. It should be the public’s records act.”

Kefalas deserves the Sue O’Brien award, Zansberg said, because he “believes – deeply in his DNA – that that is the case and he’s fought so painstakingly to advance that philosophical view.”

In a video message, Gov. John Hickenlooper said Kefalas’ “commitment to keeping government open and accountable is, in my opinion, unmatched.”

“In the end,” the senator told the CFOIC gathering,” these public records belong to the people and we are the stewards of those records. With some logical exceptions, we need to make that information available so that we can be held accountable, so that we can have the most open and transparent government. Ultimately, this is good for our representative form of democracy.”

About 130 people attended the awards luncheon, which followed a series of morning workshops for journalists and the public on the open government laws and court access.

Anna, who served as CFOIC’s treasurer for many years, received the inaugural Ruth Anna Citizen Champion Award. Presenting the award to her, CFOIC board member Fred Brown said Anna “constantly reminded us of our need to be diverse in our activities and, if possible, in our thinking. Diverse in race, in gender and in political belief.” 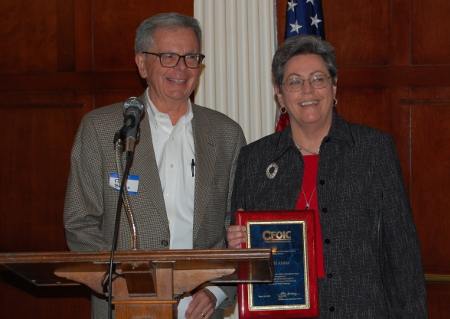 Anna, whose involvement in CFOIC dates to 1988, ran a public relations business for nearly 40 years and served as president of Colorado Press Women and the National Federation of Press Women, also representing that organization on the National First Amendment Congress.

She said her passion for free speech and the First Amendment began as a child, recalling that her father insisted the school library carry copies of Soviet Life magazine because “we need to know about the people in other countries that we tend not to know about and fear.”

Is it legal for a Colorado school board to name just one finalist for the superintendent’s job?