Legislation designed to stop law enforcement agencies and other governments in Colorado from encrypting all of their dispatch radio communications died Thursday in a committee of the state legislature.

Rep. Kevin Van Winkle, a Highlands Ranch Republican, introduced House Bill 18-1061 because of what he called a “troubling trend” among police and sheriff’s departments to block the public from monitoring their radio traffic using scanners, receivers and smartphone apps.

About a dozen law enforcement agencies around the state encrypt all of their radio channels, according to Van Winkle. The bill, he said, tried to strike a balance between the public’s right to know and agency needs by giving police discretion to encrypt certain channels used for tactical and investigative purposes. Overall, the legislation stated, encryption by state and local government entities “should be exceptional rather than routine.” 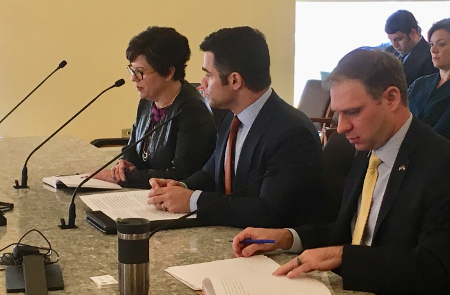 “What is our public policy going to be?” testified Robert Wareham, an attorney and scanner enthusiast who helped draft the bill. “Are we going to let all of the agencies go behind that curtain or are we going to keep our society open?”

The measure lost on a 6-3 party-line vote in the House State, Veterans and Military Affairs Committee, with majority Democrats raising concerns about local government control, privacy and the liability of law enforcement officials if they are sued for violating the measure. Those opponents, however, said Van Winkle’s proposal raised an important issue that deserved further deliberations later in this legislative session or next year.

“I think you’re on to something,” said Rep. Jovan Melton, D-Aurora.

Nicole Vap, director of investigative journalism at 9NEWS, told the committee that she grew up listening to police scanner traffic with her grandmother in a small Nebraska town.

“I’m sure very few people spend quality time listening to a police scanner with their grandmother,” Vap said, “but she taught me that we all have a great responsibility to know what’s going on in our community and to understand what our entire government is doing. She’d say, ‘You can’t complain if you don’t know what’s going on.’”

Vap, who is vice president of the Colorado Freedom of Information Coalition, recounted how 9NEWS learned about the 2012 Aurora movie theater shooting from police radio communications. She was on the scene within 30 minutes.

“I held up my cellphone so Channel 9 could broadcast that first briefing live on television,” she said. “It was a horrific night, but if it had happened today I may not have been there to get that briefing to the public because Aurora is now encrypting their scanners and we don’t know what’s going on. We would have been delayed in sharing the most important moment in Aurora’s history.”

Radio stations that serve small communities in Colorado rely on police scanners to get information on public safety matters so they can quickly relay that information to listeners, testified Justin Sasso, CEO of the broadcasters association. “If instead you must wait until a public information officer makes contact … the public ends up exposed to a dangerous situation with little or no information,” he said.

Sasso noted that some law enforcement agencies are letting what they deem to be “credible” news organizations purchase equipment so they can monitor some encrypted channels in case of local emergencies. “It is not these agencies’ duty to determine who is and who is not a credible news (organization),” Sasso said.

The public has a right to know about police activities, “but the question is when,” said Louisville Police Chief David Hayes. He said allowing some channels to be encrypted while others must be open could put officers’ safety at risk if they switch to the wrong channel. “We don’t want them to fumble with their radios any more than they already have to,” he said.

Kevin Klein, director of the Colorado Division of Homeland Security and Emergency Management, said unencrypted radio traffic poses a threat to public safety and allows the spread of misinformation. He noted that Twitter users listening to scanner traffic during the 2015 Planned Parenthood shooting in Colorado Springs live-tweeted incorrect information about the shooter’s identity and how police were responding to the incident.

But Rep. Dave Williams, R-Colorado Springs, said the bill was appropriately balanced and allowed law enforcement to do its job. “My main concern is I don’t think the government should get to decide when and how information should be released,” he said. “… I’m going to defer to the First Amendment. I’m going to defer to the people’s right to know.”