A newly appointed state task force began work Tuesday on a host of issues surrounding the use of body-worn cameras by police officers.

Some important considerations concern public records: How long should body camera videos be retained and at what cost? What determines whether a video can be released to the public? Should portions of a video be blurred before the public sees it?

And a similar question about the audio from body cameras – should portions be muted?

“People will literally walk in (to a police department) with a two-terabyte hard drive and say, ‘I want all the video from yesterday,’” Tom Maureau of Winbourne Consulting told the panel, which met at state Department of Public Safety headquarters in Lakewood. “Many jurisdictions are dealing with that. It’s something you have to consider.” 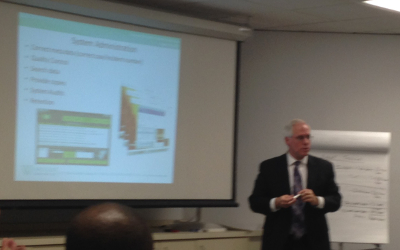 The 15-member committee is mandated by HB 15-1285, passed by the Colorado legislature this year to create a grant program for helping law enforcement agencies purchase cameras, train officers and manage the video data. The panel will study policies and best practices throughout the nation and report by Mar. 1, 2016, on myriad issues related to transparency, costs, privacy rights, redaction, data storage and manpower.

It’s unclear whether the committee will draft guidelines for law enforcement agencies on the public release of body camera footage. Under the Colorado Criminal Justice Records Act, such footage is released or withheld at the discretion of records custodians, who must determine whether disclosure would be “contrary to the public interest.”

Some states, such as South Carolina, have exempted police body-camera footage from public records laws.

CFOIC President Steve Zansberg serves on the Colorado panel, which is required to include a representative from an organization that advocates for government transparency. Zansberg, a partner in the law firm of Levine Sullivan Koch & Schulz, recently helped draft the Media Law Resource Center’s model policy on public access to recordings made by police body-worn cameras.

Zansberg volunteered to be part of a Colorado panel working group that will look at possible enforcement mechanisms and legal remedies available to the public when a body-worn camera policy is not followed or when an agency fails to adopt a policy.

On Tuesday, Maureau gave the committee an overview of body-camera technology and outlined some of the issues facing law enforcement agencies that already use cameras.