The Colorado Independent Ethics Commission, which investigates allegations of ethical misconduct involving public officials, is writing its own rules of access to public records that differ in many respects from the Colorado Open Records Act.

IEC Executive Director Dino Ioannides said the commission does not consider itself subject to CORA, primarily because it is housed in the state’s judicial branch. The IEC is not included in records access rules adopted by the Colorado Supreme Court in 2015 so it has been operating without a written set of records regulations, he added.

But the proposed new rules, which are posted on the commission’s website, have some wondering how the commission can exempt itself from Colorado’s public records laws. 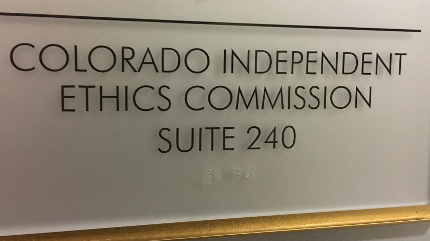 “They are inviting a lawsuit over this,” said Luis Toro, who ran Colorado Ethics Watch, a nonprofit that closely monitored the IEC for several years before shutting down at the end of 2017.

Deputy Secretary of State Suzanne Staiert said the IEC is on “shaky legal ground and shaky ground from a policy perspective.”

“A lot of agencies have rule-making authority,” she said, “but that doesn’t mean you can promulgate rules outside of the law. Rules are promulgated to add clarity or to make administration more effective, but not to override statutes.”

Toro, in an email to the CFOIC, wrote that the IEC is incorrectly interpreting a 2016 Colorado Supreme Court ruling to mean that “the legislature has no authority over them whatsoever, so CORA would not apply … I think this is reading too much into a decision that was about a law the legislature passed specifically related to the ethics commission, not one of general applicability.”

That case, in which Colorado Ethics Watch sued the ethics commission, pertained to whether complaints dismissed as frivolous by the IEC are subject to judicial review. The Colorado Supreme Court determined that a judicial review provision in state law “does not apply to frivolity dismissals.”

Ioannides acknowledged that the ruling did not address whether IEC is subject to CORA, but “it was interesting how the court treated us. We’re a constitutionally created entity, not a state agency.”

Colorado voters added the ethics commission to the state constitution when they passed Amendment 41 in 2006. Originally placed in the Colorado Department of Personnel and Administration, the IEC moved to the judicial department in 2010 as part of House Bill 10-1404.

The previous year, in an earlier case filed by Colorado Ethics Watch, a Denver District Court judge declared that “the IEC is subject to CORA.” But in 2012, Ioannides noted, the Colorado Court of Appeals ruled that Colorado’s judiciary is not a state agency “for the purposes of CORA.”

Because the IEC by then was in the judicial branch, “I would read the Denver District Court case in that light,” he said.

Ioannides cited a comment in those Supreme Court rules, that the IEC “is an independent and autonomous constitutional entity,” as additional evidence that the commission has the authority to write its own records access regulations.

Staiert, however, pointed out that the Colorado Secretary of State is also a constitutional entity and it is covered by CORA.

The proposed IEC records rules are more restrictive than CORA in some ways. For example, they allow the commission’s records custodian to determine whether records “will be provided in print or electronic format” in response to a request. That conflicts with a CORA amendment, signed into law in 2017, entitling requesters to public records in “sortable” or “searchable” formats if the records are kept that way.

The proposal also would allow a denial of records if disclosure “could compromise the safety or security” of an IEC employee or commissioner, a provision (not in CORA) that could be interpreted broadly.

“It’s distressing that the IEC is focusing its limited resources on trying to operate in more secrecy when they should be focused on giving clearer guidance to covered persons though regulations and on processing complaints more quickly and thoroughly,” Toro said.

The proposed IEC rules, drafted by the commission’s legal counsel, note several places where they differ from CORA. “Many deviations … reflect the unique nature of the records and operations” of the ethics commission, the document states.

Ioannides highlighted one such difference, which would allow him to extend the deadline for responding to records requests made while he’s preparing for an upcoming commission meeting. “We have one staff member – me,” he said. “I prepare the commission’s agenda. I take out the trash. The staff of the commission has to take care of the commission’s business.”

The IEC is asking the public to submit written comments on the proposed rules by Jan. 31. The commission is scheduled to consider the comments at its Feb. 12 meeting.

CFOIC report shows easy access to police internal affairs files in other states, unlike in Colorado