On a 56-8 vote Friday, the Colorado House rejected Senate amendments to a bill that regulates how much the state and local governments can charge you to research and compile public records.

“I’m going to invoke the name of Amy Winehouse when she said, ‘No, no, no!’” said Rep. Joe Salazar, D-Thornton, asking fellow representatives to appoint a conference committee to resolve differences between House and Senate versions of HB 14-1193. 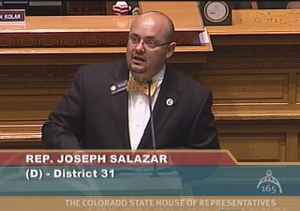 As it stands, the bill caps research-and-retrieval fees under the Colorado Open Records Act (CORA) at $30 per hour, with the rate adjusted for inflation every five years. It also mandates that the first hour of research be provided at no cost.

Salazar told House colleagues that senators “put a superfluous, ambiguous amendment” on the bill. Just before passage on third reading, they added language saying that fees must be equal for all requesters, whether they are individuals, media representatives, public or private entities or for-profit or non-profit entities.

Lobbyists representing both custodians and requesters of information have balked at the new wording, calling it unnecessary and unclear.

The version of HB 14-1193 that passed the House in late February set a maximum research-and-retrieval rate of four times the state minimum wage, which is currently $8 per hour.

Both versions of the bill prohibit governments from charging for public records without first publishing their fee policies on the Internet or in some other form.

The measure would make it illegal to obtain a booking photo with the intention of posting it online and charging a fee to take it down. Doing so would be a misdemeanor punishable by a fine of up to $1,000.