“This is one of those bills that was hotly debated throughout the session and really did require some gentle caresses and firm molding,” Hickenlooper said. “But when you see some very conservative components of our community and some very liberal components of our community coming together, generally you know that there’s good things close at hand.” 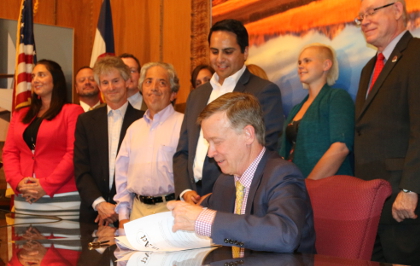 The road to Senate Bill 17-040 started with a 2015 CORA request made by the Fort Collins Coloradoan for Colorado State University’s database of faculty salaries. CSU provided the newspaper with 145 printed pages from the database, rather than a digital, easy-to-analyze copy, claiming it had fulfilled its obligations under the open-records law.

Kefalas got involved after reading a column on the denial written by Steve Zansberg, president of the Colorado Freedom of Information Coalition. After the senator’s initial CORA modernization effort failed in 2016, the Secretary of State’s office convened a working group – which included the CFOIC – to craft a new proposal that balanced the public’s right to know with concerns raised by government entities.

“I thought it was a great way to cross the finish line and that is for this bill to pass on the last day of the legislative session 35-0 in the state Senate,” said Kefalas, a Fort Collins Democrat.

“Ultimately transparency and accountability in our government is not a Democratic value or a Republican value, it’s a Colorado value,” Pabon said. “And I think Senate Bill 40 crystallizes that.”

Here are seven things to know about how CORA is changing.

Zansberg: The right to inspect the public’s records