Parents and advocates celebrated the signing of SB 16-038 on Wednesday at the Denver-based community-centered board whose financial woes motivated state lawmakers to impose transparency measures on all 20 nonprofits that coordinate services for Coloradans with disabilities.

Gov. John Hickenlooper put his signature on the bill at Rocky Mountain Human Services, which was the subject of a scathing Denver audit last year. City Auditor Tim O’Brien found “unreasonable spending and poor accounting practices” at RMHS, including overcharging the city $650,000 for administrative expenses. 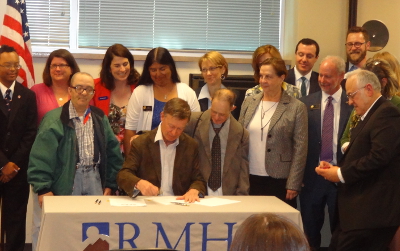 “We have worked through this last year with transparency and openness as a driving force behind us, and we will continue to use openness and transparency as a driver moving forward,” said Shari Repinski, who recently was named executive director of RMHS after serving as interim chief for the past year.

She replaced a controversial executive director who presided over the financial troubles and has since sued RMHS, claiming he was wrongfully fired after more than 30 years. The board has filed a counterclaim.

As introduced by Sen. Irene Aguilar, a Denver Democrat, SB 16-038 would have made community-centered boards (CCBs) subject to the Colorado Open Records Act. But Aguilar agreed to remove the CORA provision after the CCBs and other nonprofits that receive government money balked at the open-records mandate.

Instead, the enacted version requires the state auditor to conduct a performance audit of each community-centered board that receives at least 75 percent of its funding from public sources (all 20 qualify). It also requires the online posting of CCB agendas, meeting minutes, tax returns, government contracts and financial audits. If a request is made, CCBs will have five business days to provide copies of annual budgets, annual summaries of revenues and expenditures and financial policies and procedures.

The state’s 20 CCBs receive anywhere from 82 percent to 94 percent of their revenue from federal, state or local tax dollars.

Hickenlooper said that human services agencies are challenged to “constantly function at the highest level. Those services you deliver have to be not just compassionate and filled with love, you have to dot i’s and cross t’s at a level that 10 years ago probably didn’t have the same level of importance.”

Aguilar and Rep. Dave Young, a Greeley Democrat who co-sponsored the bill in the House, thanked those who worked with the CCBs on a compromise, including advocates and family members of people with developmental and intellectual disabilities.

“It wasn’t easy,” Young said. “There were times when there was a lot of tension, but people hung in there.”

Denver’s government can do a better job communicating with the public, city auditor says