Signing the CORA reform bill Friday, standardizing fees that governments in Colorado can charge to fill public records requests, Gov. John Hickenlooper cited President Teddy Roosevelt’s fondness for many of the muckraking journalists of his era.

“He would say to his Department of Commerce or whatever, ‘Give this man total access to all the information he wants,’” the governor told the lawmakers and citizens assembled in his office for a signing ceremony.  “He did that all the time because he said that the journalists were the ones who helped him improve government.” 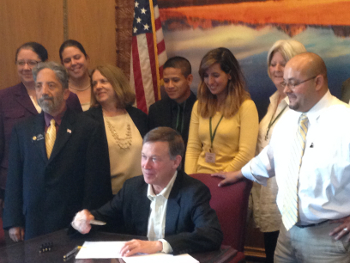 HB 14-1193, which goes into effect July 1, is aimed at helping journalists and all residents of Colorado keep their governments honest and transparent. For the first since the Colorado Open Records Act (CORA) was enacted in 1969, the law will specify a maximum rate for researching and compiling public records that aren’t criminal justice records, setting a standard for all governments in the state.

Until now, with state statutes silent on research-and-retrieval fees, governments and agencies have set their own rates with some guidance from the courts that many lawyers say is ambiguous. As a result, charges for public records have been “all over the map,” according to a 2013 report by Colorado Ethics Watch.

The bill, sponsored by Democratic Rep. Joe Salazar of Thornton and Democratic Sen. John Kefalas of Fort Collins, mandates that the first hour of research be provided to the requester at no cost. After that, the hourly rate can be no more than $30, a rate that will be adjusted for inflation every five years.

HB 14-1193 also prohibits governments in Colorado from charging for public records without first publishing their fee policies on the Internet or in some other form.