Rachel Zenzinger’s appointment to the Colorado Senate last fall created a vacancy on the Arvada City Council that was filled in January using secret ballots to eliminate candidates.

On Thursday, Sen. Zenzinger explained why she is now sponsoring legislation making it “crystal clear” that any person has legal standing to challenge violations of Colorado’s Open Meetings Law, also known as the Sunshine Law. 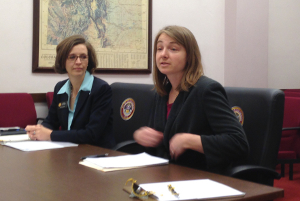 Arvada resident Russell Weisfield sued over his city’s use of secret ballots, but a judge dismissed the case in late March because Weisfield couldn’t prove that he had been personally injured by the council’s hidden votes. Zenzinger told members of the Senate Local Government Committee that the district court’s decision “makes no sense.”

“The idea that an open meetings act is only to protect the particular affected individual and not the citizens of the community at large is just wrong and cannot stand,” the Arvada Democrat said.

“It’s important for the legislature to act,” Zenzinger added. “We owe it to all Coloradans to send a strong message to the judiciary that we expect all members of the public to be able to challenge any violation of the Open Meetings Law.”

The Senate Local Government unanimously passed HB 14-1390, which previously encountered no opposition in the House, and the bill now heads to the Senate floor.

Sen. Greg Brophy also is Senate sponsor of the measure. The Wray Republican carried HB 12-1169 in 2012 after the Colorado Court of Appeals ruled that the Fort Morgan City Council did not violate the Open Meetings Law when it used anonymous written ballots to appoint two council members and a municipal judge in 2009 and 2010.

With only a few exceptions, the two-year-old law prohibits the state or any local public body from using secret ballots to adopt “any proposed policy, position, resolution, rule, or regulation” or to take “formal action.”