SB 17-040, which is intended to clarify the public’s right to digitized government records in useful formats, heads to the Senate floor for debate with a $50,810 state general fund appropriation in FY 2017-18. The dollar amount stems from a separate amendment to the bill added earlier this month in the Republican-controlled Senate State, Veterans and Military Affairs Committee. 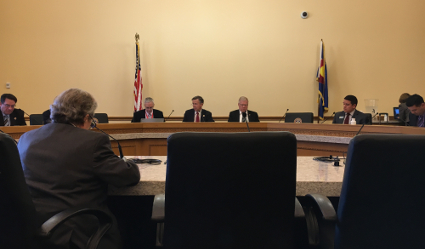 That amendment would make Colorado’s judicial branch subject to the Colorado Open Records Act (CORA), a concept rejected earlier this session and last year by a Democratic majority of House committee members. The bill’s primary sponsor, Sen. John Kefalas, D-Fort Collins, hoped the appropriations committee would remove the provision, which he has termed “problematic” because of opposition in the Democratic-controlled House.

The bill didn’t have a price tag until the judicial branch amendment was added. The $50,810 general fund amount, plus $21,652 appropriated from other funds, is the estimated cost of having legal staff handle about 60 CORA requests per year in the Office of the State Public Defender, which currently isn’t required to respond to CORA requests.

“I had asked that (an amendment) be adopted to remove the fiscal impact,” Kefalas said. “Apparently, Sen. Gardner decided it was substantive and the matter of including the judiciary department or not including it under CORA is something we should be debating.”

Colorado Springs Sen. Bob Gardner, a Republican co-sponsor of SB 17-040 and a member of the appropriations committee, said he isn’t convinced the amendments added in the state affairs committee are “good policy or not, but I prefer to save that for the (Senate) floor….I prefer to put the appropriation on and have the discussion on the floor.”

While the judicial branch amendment is controversial, merely declaring the branch subject to CORA would have “zero effect” if it stays on the bill, according to Steve Zansberg, a First Amendment attorney who is president of the Colorado Freedom of Information Coalition. He noted that the Colorado Supreme Court has established rules governing access to the judicial branch’s administrative records and that CORA prohibits disclosure of records protected by court rules.

Other amendments added to SB 17-040 in the state affairs committee on March 1 were aimed at addressing cybersecurity and general safety concerns raised by the Office of the Attorney General and some government entities. But they could be interpreted to create broad new exemptions in CORA.

One of the amendments would let records custodians deny requests for “any records the inspection of which is reasonably likely to compromise the safety or security of any natural person.” Another would allow the withholding of “metadata,” which is information about data, although the term is not defined anywhere in the bill. Other language could be interpreted to allow agencies to withhold other documentation about their databases.

As introduced, SB 17-040 generally required that public records stored as structured data be provided to the public, if requested, in a similar format. If metadata is not defined, a requester could be prevented from obtaining information needed to properly understand public records kept in spreadsheets or databases.

Kefalas has been working to build a compromise on SB 17-040, which was the product of a months-long stakeholders’ effort convened by the Colorado Secretary of State’s Office.

The appropriations committee voted 4-3 to move the bill to the Senate floor with Republican Sens. Jerry Sonnenberg, Kevin Lundberg and Kent Lambert in opposition.