A bill to standardize fees for public records in Colorado was amended by lawmakers Wednesday to cap charges for filling requests for information at four times the state minimum wage.

The House Local Government Committee approved HB 14-1193 on a 9-4 bipartisan vote, removing language that would have codified case law which says that research-and-retrieval fees “must be nominal in comparison to the time the custodian spends responding to the volume of requests.” The maximum fee in the bill as introduced was three times Colorado’s minimum wage (currently $8 per hour).

Rep. Joe Salazar, the Thornton Democrat who is sponsoring the measure, said he isn’t satisfied with the amended version and hopes to get the “nominal” standard reinstated on the House floor or in the Senate. Without that standard, he is concerned that a records request assigned to a government employee who earns, say, $16 per hour could be billed at a higher rate. 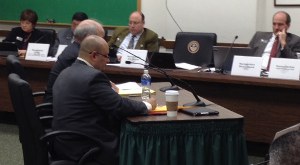 “I still want to get the nominal standard in there, but I think it was important to get the bill out of committee,” Salazar said. He added that he was prepared to kill his legislation if another proposed amendment, allowing a government to recoup no more than its “actual” costs, had been successful. It was not.

The Colorado Open Records Act (CORA) now says nothing about how much local governments and the state can charge to research and compile public records that are not criminal-justice records. It addresses only the cost of data manipulation and computerized records, and it specifies that you can’t be charged more than 25 cents per page for standard copies of public documents.

With state statutes silent on fees, governments have set their own rates with guidance from the courts. A 2003 Colorado Court of Appeals decision established that public entities can charge only “nominal” fees to research and retrieve large amounts of records, with “nominal” defined as “trifling, especially as compared to what would be expected.” Last August, the Court of Appeals upheld a $25-per-hour tab.

If Salazar’s bill becomes law without codifying the nominal standard, the case law set by the Court of Appeals would still apply, said Steve Zansberg, a media-law attorney and president of the Colorado Freedom of Information Coalition.

“This bill (as amended) doesn’t change the current law with respect to the nominal standard. We go back to the existing state of common law, to the judicial-made law,” Zansberg said. That means what governments are allowed to charge for filling record requests – a function of hours multiplied by an hourly rate – still must be “nominal.”

Geoff Wilson, general counsel for the Colorado Municipal League, testified during the committee hearing that cities and towns were against codifying the nominal standard in HB 14-1193 because the Court of Appeals’ guidance has been interpreted in different ways by different attorneys.

He criticized the original version of Salazar’s bill as putting into statute “the very vague language that this bill is supposed to save us from…In our view, the codification of the ambiguity doesn’t benefit us in local government. It doesn’t benefit the public. It benefits trial lawyers that make their living suing local governments.”

But Luis Toro, executive director of Colorado Ethics Watch, said putting the nominal standard in the bill would add certainty and “preclude some big lawsuit” over how the Court of Appeals’ rulings should be understood.

An alliance of left-of-center and right-of-center activist organizations testified in favor of HB 14-1193 with it original wording.

Jon Caldara, president of the conservative Independence Institute, said the legislation was needed to establish statewide consistency among governments that now charge varying amounts – some unreasonably high – to research and compile public records.

“The people of Colorado, no matter the size of their wallets, should be able to peer inside the inner workings of their government,” Caldara said.

“I don’t get a chance to say this very often – Mr. Caldara echoed my feelings about this bill,” said Elena Nunez, executive director of Colorado Common Cause.  She reminded committee members that “the goal of the open records act is to create more transparency… and it’s appropriate that these records be accessible to all without having to pay significant costs.”

Gilpin court’s $2,254 bill for casino citations based on 30 minutes to review each record