A bill to modernize Colorado’s open-records law cleared its first legislative hurdle Wednesday, but lawmakers added amendments that could be broadly interpreted to allow the withholding of some records currently available for public inspection.

SB 17-040, which passed on a 4-1 vote in the Senate State, Veterans and Military Affairs Committee, is intended to clarify the public’s right to digitized government records in useful formats that allow for analysis of the information.

However, an amendment requested by the Colorado attorney general’s office could let records custodians deny requests for “any records the inspection of which is reasonably likely to compromise the safety or security of any natural person.” Other changes that could allow the withholding of records are aimed at addressing cybersecurity worries raised by committee members and some government entities. 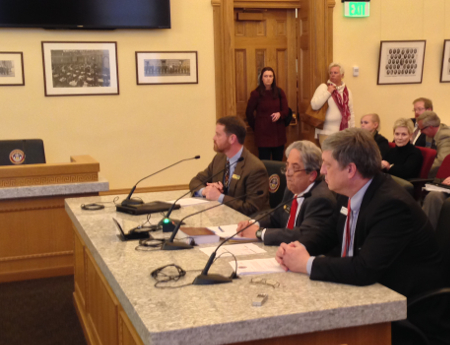 Sen. John Kefalas, the Fort Collins Democrat who introduced the bill, said he is committed to working with both requesters and governments on their issues as the measure moves to the Senate Appropriations Committee and, if successful there, onto the Senate floor.

“I don’t want to change what’s available through CORA,” Kefalas said. “At the same time, I don’t want to dismiss legitimate concerns about safety and security.”

The judicial branch is exempt from CORA because of two Colorado court rulings, most recently Gleason v. Judicial Watch in 2012. Sen. Lois Court, D-Denver, said she is concerned about how CORA would impact the state public defender’s office and voted for SB 17-040 despite the “inappropriate” amendment.

“I guess my thought is, if we want 100 percent transparency in the government, what’s good for one is good for all,” Scott said.

Several journalists and citizen groups testified in favor of Kefalas’ bill. Also speaking in favor was Colorado Secretary of State Wayne Williams, whose office convened a CORA Working Group last year after the defeat of a similar measure.

That stakeholders’ committee, which developed SB 17-040, included the Colorado Freedom of Information Coalition as well as journalists, lawmakers, citizen watchdogs and representatives of government entities (although some governments did not support the legislation as introduced).

“This bill makes it easier for Coloradans to get documents in a format that they can use,” he said, “and it does it while providing protections for information that should not be disclosed.”

SB 17-040 is designed to solve a problem faced by some records requesters in Colorado: Records kept in spreadsheets and databases sometimes are released to the public as printouts or PDFs, which make analysis difficult or impossible. Government entities sometimes withhold datasets that contain confidential fields of information rather than redact the private data and release the public portions, saying they are not required by CORA to “create a new record.”

With some exceptions, the bill requires that public records stored as structured data – an Excel spreadsheet, for example – be provided to the public, if requested, in a similar format. Public records maintained in some other searchable format – emails, for instance – must be provided in a format that can be read by a computer.

The bill also clarifies that the altering of an existing public record to excise confidential fields does not constitute the creation of a new record under CORA.

As introduced, the legislation did not create any new exemptions in CORA nor did it open any records currently exempt from disclosure.

Another amendment approved by the committee included several provisions requested by the AG’s office. One of the changes would allow a records custodian to withhold “metadata,” although that term is not defined anywhere in the bill.

Metadata is information about data. A concern is that this provision, if metadata is not defined, could prevent a requester from obtaining a data dictionary or a record layout, which often are needed to properly understand public records kept in spreadsheets or databases.

Another possibly problematic provision would allow the withholding of “the terms and conditions of any actual or proposed license agreement” by which a government entity licenses products or services from a private vendor, using public funds. A government, under this language, might be able to hide contracts such as the new $6.1 million agreement between Denver and a company that will provide database management software for several city departments.

Testifying against the bill Wednesday were representatives of Colorado Counties Inc., the University of Colorado, Colorado School of Mines, the Colorado Water Congress and the Associated Governments of Northwest Colorado.

They expressed concerns about data security, the burden on smaller governments and data mining by out-of-state companies that use public records for commercial purposes.

“They’re too lazy to do their own work and now they want our county clerks to do the work for them so they can have a larger customer list,” said Sen. Jerry Sonnenberg, R-Sterling.

But “next time or another time it could be a nonprofit looking to analyze public data for something that is very much in the public good,” said Sen. Steve Fenberg, D-Boulder.