The terms of a settlement agreement between two liquor retailers embroiled in an open-records dispute won’t be disclosed, but the owner of Hazel’s Beverage World in Boulder said he’s “extremely pleased” by the outcome.

“I have these very interesting documents that have the information I was seeking when I went to Wheat Ridge,” said Bruce Dierking, who was sued by Applejack Wine & Spirits after he obtained Applejack’s liquor license records from the Wheat Ridge city clerk.

Applejack and Wheat Ridge claimed in their lawsuit that Dierking was mistakenly given records “filled with highly sensitive personal and commercial information” protected from disclosure under the Colorado Open Records Act (CORA).

Applejack sought an injunction declaring that Dierking wasn’t entitled to use or possess the records, and Dierking in a counterclaim accused the store of impinging on his legal right to obtain documents under CORA and his free speech right to talk about the documents. 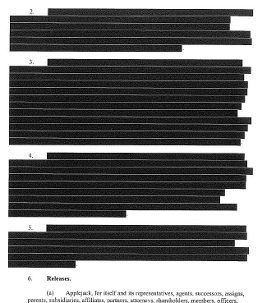 Terms of the settlement agreement were redacted by the Wheat Ridge city clerk.

When the parties settled the Jefferson County District Court case last month, Wheat Ridge and Applejack asked the court to protect four paragraphs of the settlement agreement from disclosure. They later withdrew that motion, but those paragraphs were redacted from a copy provided by Wheat Ridge on Friday to the Colorado Freedom of Information Coalition.

The paragraphs, which contain all the terms of the agreement, were withheld from disclosure because of CORA’s exemption for “trade secrets, privileged information and confidential commercial or financial information,” City Clerk Janelle Shaver wrote in an email to the CFOIC. The agreement stipulates that its terms are to remain confidential.

Dierking’s interest in Applejack’s licensing records stems from the state legislature’s consideration earlier this year of two unsuccessful bills that would have allowed independent liquor stores to secure more licenses than a 2016 law allows. Applejack supported the legislation and Dierking opposed it.

He decided to check Applejack’s licensing records at Wheat Ridge city hall after an owner of the store testified about Applejack’s ownership structure during a legislative hearing.

Applejack later won a temporary restraining order against Dierking, requiring him to give all of the documents to the court and “make no use” of the information contained within them, including disseminating it to any third parties “orally, in writing, or otherwise.”

That restraining order is no longer in effect, but Dierking said he won’t do anything with the licensing records the settlement allows him to retain unless the proposed liquor store legislation resurfaces.

“If there is going to be a legislative debate, I want legislators to have the honest, truthful information,” he said.

Gilpin court’s $2,254 bill for casino citations based on 30 minutes to review each record