Name the one place in Colorado where someone who isn’t a lawyer can look at digital images of civil court documents on file anywhere in the state.

That’s right. There’s only one location where a non-lawyer can view and request copies of all civil court documents from ICCES, the Integrated Colorado Courts E-Filing System.

Attorneys who subscribe to ICCES can look up civil court documents on their laptops, but you can’t. You certainly can’t get them on your phone, either. And even though many courthouses around the state have public terminals, those only let you call up civil filings from that particular district.

Say you want to look at criminal court documents. You can’t. Not on the terminals at the Supreme Court’s law library, nor on your computer. Not unless the documents concern a high-profile matter like the Aurora theater shooting and the court has elected to post documents on its “cases of interest” web page. 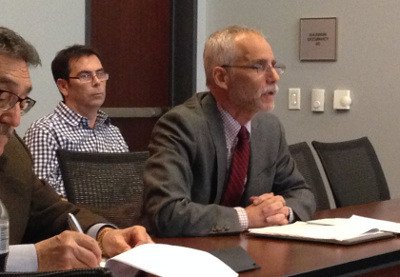 Chessin made a proposal last Friday to the Colorado Judicial Branch’s Public Access Committee: Let anyone look at Colorado court documents – for free – on public library computers throughout the state.

Chessin can think of lots of circumstances in which Coloradans would pull court records on free library terminals. Someone who lives in Yuma County or Moffat County, for instance, might want to look at recent Denver District Court decisions on ballot access in the U.S. Senate race. A teacher might assign her students to look up cases around the state for a class project. A student might want to research Colorado’s judicial system.

Journalists for years have been asking Rob McCallum, public information officer for the judicial branch, when Colorado will provide online access to court records – both civil and criminal filings.

“It’s an ongoing request,” he said. “When are we going to get a PACER-like system? That’s the larger question.”

PACER, which stands for Public Access to Court Electronic Records, is a 24-hour online service that lets anyone with a computer call up documents from federal appellate, district and bankruptcy courts. It’s inexpensive – 10 cents a page with a cap of $3 for access to any single document. Fees are waived if you spend less than $15 in a quarter.

No state has “one-stop shopping” for electronic court records, but some are expanding remote public access, said Bill Raftery, an analyst at the National Center for State Courts in Williamsburg, Va. For example, a phased-in project in 59 Florida counties, including Manatee, is making certain court records viewable online.

Colorado Court of Appeals Judge Jerry Jones, who chairs the Public Access Committee, suggested the group discuss Chessin’s proposal at its next meeting, which is scheduled for Sept. 21. The committee isn’t authorized to pursue such a system for Colorado, but it can make recommendations.

Cost is likely to be the foremost issue. But there are legal, security and privacy concerns as well, especially if criminal court records are to be posted online.

Criminal filings often contain information that must be suppressed for one reason or another. In the theater shooting case, McCallum said, the judicial branch had three levels of review before documents were allowed to be posted in the “cases of interest” section of the 18th Judicial District’s website.

“I don’t think a for-profit company ought to stand in the way of a citizen using a state-owned and state-operated system…to gain access to the state’s judicial system,” Chessin said.