Twenty-eight states now offer some way for journalists and the general public to appeal a denial of government records short of filing a lawsuit, according to data presented at last month’s national Freedom of Information Summit in Cincinnati.

Colorado isn’t one of them, as we’ve pointed out a few times in an attempt to spark interest in an alternative dispute resolution process for the Colorado Open Records Act and, perhaps, the Colorado Criminal Justice Records Act. Republican attorney general candidate George Brauchler joined the conversation over the summer by using social media to try to “crowdsource” a legislative proposal based on Texas’ system of having its AG’s office decide public records disputes.

A two-year-old process in Ohio might be worth looking at, too.

Dennis Hetzel, executive director of the Ohio News Media Association and president of the Ohio Coalition for Open Government, thinks Ohioans “now have a fighting chance – no matter their resources or standing” when they believe they are wrongly denied public records.

That’s what Hetzel wrote recently in the Akron Beacon Journal. His description of the way things used to work in Ohio sounds a lot like how things work in Colorado: “Until 2016, the playing field in Ohio tilted heavily in the government’s direction. It was easy for officials to say ‘no’ – even when they should’ve said ‘yes.’ That’s because they knew that most citizens did not have the financial resources to file a lawsuit and go to court.” 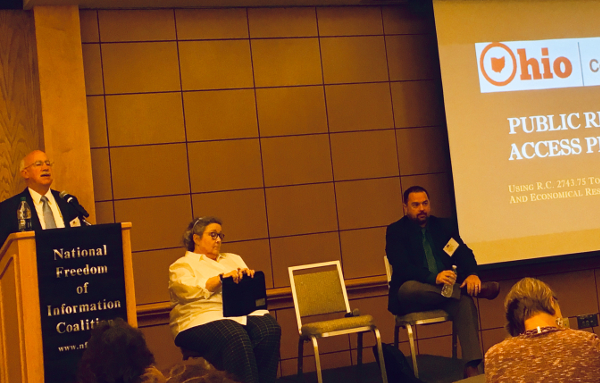 Now, for just a $25 fee and the filing of an online form, the Ohio Court of Claims will review a denial and resolve a dispute.

Sometimes it takes just a phone call, said Jeff Clark, Ohio’s public records master, during a presentation at the FOI Summit. A staff attorney starts the process, he explained, by “taking the pulse of the case to see if it’s just a matter of timing. Is the public office in the middle of getting all the records and the requester just hasn’t been told that? That’s one way it might be resolved.”

Other possibilities: The records custodian “needs a cattle prod,” to handle a request more quickly; a request is worded ambiguously; or one party in the dispute misunderstands the law. “Either the public office or the requester may not understand that you absolutely can or absolutely can’t request this set of records,” Clark said.

The next step, if necessary, is mediation, conducted by phone or video conference by a neutral third party. If the dispute remains unresolved, an expert special master reviews the case and makes a recommendation to the Court of Claims, which issues a formal order that can be appealed in the state court system.

There is no trial or civil discovery, and the streamlined process is more expeditious than the old way of filing a mandamus action (still an available option), Clark said.

Although the new process is technically a legal action, rather than an administrative appeal, it’s designed so that the records requester doesn’t need to bear the upfront cost of hiring an attorney. (In Colorado, the only legal remedy in CORA is the filing of an application in district court. The requester can recover attorney’s fees and court costs if he or she prevails in the lawsuit. A 2017 law requires requesters to wait 14 days before suing; during that period the records custodian must speak with the requester in attempt to resolve the dispute without litigation.)

In Ohio, more than 60 percent of the 215 cases so far have settled between the initial triage and mediation phases, Clark said. “This means they’ve come to an agreement that either they aren’t going to get the records, they absolutely get the records or they’ve agreed to some creative solution that satisfies both parties.”

The new process, which costs about $650,000 annually, “has worked beyond our expectations,” Hetzel wrote in his Beacon Journal column.

His favorite case resulted in the release of body camera footage of a jail incident. The county tried to argue that the footage revealed confidential “security and infrastructure” images, but a reporter pointed out that a documentary crew had been allowed to record video in the same area.

In another case, also decided in the requester’s favor, a park district contended that a letter containing complaints and recommendations was not a public record, even though it had been cited in a public meeting.