Update: The Senate Appropriations Committee reconsidered HB 15-1285 on Monday, May 4, and advanced it to the Senate floor on a 4-3 vote.

A bipartisan bill that underscores a civilian’s right to record police is on its way to Gov. John Hickenlooper’s desk following the House’s acceptance Friday of a Senate amendment that limits how long someone’s cellphone or other recording device can be held while a search warrant is sought.

Also on Friday, the Senate Appropriations Committee killed HB 15-1285, which would have promoted the use of body-worn cameras by police officers through a grant program. That measure had previously passed the House and Senate Judiciary Committee. The bill’s Senate sponsor told The Associated Press he would try to revive it before the session ends next week.

The Senate amendment to HB 15-1290, the right-to-record legislation, gives an officer 72 hours to obtain a warrant if seizing a phone, camera or recorder is necessary to save a life or to prevent the destruction of evidence.

“This amendment’s really cool,” said Democratic Rep. Joe Salazar of Thornton, a co-sponsor, before the House voted 63-1 to repass the bill.

The right-to-record bill had a relatively easy ride through the Senate, winning unanimous support on the floor after undergoing several revisions in the House that were designed to appease prosecutors and law enforcement officials. The measure is in response to Colorado and national incidents in which police have improperly seized phones and tablets, deleted video or otherwise interfered with a citizen’s First Amendment right to record law enforcement activities. 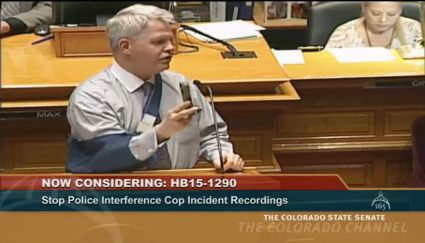 The language of the bill spells out a process for an officer to follow if he or she wants to obtain a recording made by a bystander. The officer would be required to provide identification, including badge number, and a “legal reason” for requesting the recording. If the person who made the recording doesn’t voluntarily give the device to the officer or consent to making an electronic copy, the officer may use other means “consistent with any policies and procedures of the law enforcement agency” to obtain the recording.

HB 15-1290 allows for a civil suit against a law enforcement agency if an officer seizes or destroys a recording without a person’s consent, but the person must first submit a claim, with $500 set as the value of a recording. If that claim is denied, the owner of the recording could sue for the replacement value of the property and punitive damages of up to $15,000 if the denial “was made in bad faith.”

“God bless the law enforcement officers that are trying to serve us and protect us. They’ve got a very hard job, and it is hard when people are videoing you,” said Sen. David Balmer, R-Centennial, during floor debate earlier in the week. “It’s hard to be a legislator when people are constantly videoing you. But it is part of our life and the right of citizens to be able to use their phones in that way.”

If cell phones had been “a thing back then” when the Founding Fathers wrote the Fourth Amendment to guard against illegal searches and seizures, such devices would have been on the list along with “persons and houses and papers and effects,” Balmer added.