A bill that underscores the public’s right to record police activities was met with opposition Tuesday from law enforcement authorities and prosecutors who called the measure overly punitive and worried about its effect on their ability to obtain recordings as evidence in criminal cases.

Following hours of testimony, the House Judiciary Committee tabled a vote on HB 15-1290 so that the sponsors can work on amendments.

Earlier in the day, the committee unanimously endorsed a separate police transparency bill, HB 15-1285, that promotes the use of body-worn cameras by officers and establishes a study group to recommend policies on questions such as video retention and access. The Senate, meanwhile, gave preliminary approval to a third measure, SB 15-219, which would require a district attorney who declines to file criminal charges in an officer-involved shooting to disclose his or her reasons to the public.

As introduced by Democratic Reps. Joe Salazar of Thornton and Daneya Esgar of Pueblo, HB 15-1290 would allow a civil suit against a law enforcement agency – possibly resulting in damages and a penalty of $15,000 – if an officer seizes or destroys a recording without a person’s consent. A lawsuit also could be brought if an officer interferes with a recording or retaliates against the person making it. 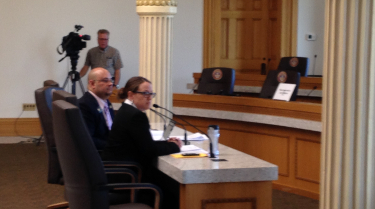 “There is a widespread and continuing pattern of law enforcement officers ordering people to stop taking photographs or video in public places and, in some instances, harassing, detaining and arresting those who fail to comply,” testified Denise Maes, public policy director for the American Civil Liberties Union of Colorado. “The ACLU has been complaining of this behavior for many, many years and we’ve been complaining about it in all parts of the country, including here in Colorado. Yet, a continuing stream of these incidents … makes it clear that the problem is not going away.”

The committee heard from a man who recorded an arrest on his tablet, only to have the device seized and later returned to him with the video missing. The clip was still available, however, because it had been uploaded to the cloud.

Irene Rodriguez, a reporter for KGNU radio in Boulder, started crying as she told lawmakers that a police officer struck her as she was recording protesters in Denver’s Civic Center Park in October 2011. “He hit me on one side with his club and then on the other side with his club and he stomped on me,” Rodriguez said. “I wasn’t able to get his name. My recording device stopped when it hit the floor so I wasn’t able to identify who it was.”

Salazar said the civil penalty in the bill would encourage law enforcement agencies to make sure their officers are trained to understand that recording police activities is a First Amendment right unless the person making the recording is breaking the law or interfering with an officer.

Noting the widespread use of smartphones and tablets, Tom Raynes, executive director of the Colorado District Attorneys’ Council, agreed that officers need better training on how to respond to citizens who record their activities.

But “accountability through lawsuits is a pretty cynical approach to getting this done,” Raynes said, adding that “if the legislature wants to inspire training and rebuild trust, we need to make sure that all these officers and all these citizens know exactly what their rights are in this realm.”

Prosecutors said the bill would make it difficult for officers to secure recordings as evidence while they wait for a warrant to be issued. Arguing that such seizures are not unreasonable under the Fourth Amendment, Raynes said “it’s absurd to let evidence of a crime leave the scene.”

“You need to consider the inherent mobility of this type of evidence and the way it can just disappear,” said Rich Orman, senior deputy district attorney for the 18th Judicial District.

But Salazar said it’s not reasonable to assume that someone lawfully recording a police incident plans to destroy that recording. If police want the video, he said, “Go and get your warrant or go and get consent.”

What is the public entitled to know when a government board closes a meeting?