A new version of a bill that reinforces a civilian’s right to record police passed the Colorado House on Wednesday on a 47-16 vote.

The latest amendments to HB 15-1290 were included to make the measure more palatable to law enforcement officials and prosecutors, who viewed the original proposal as overly punitive and worried about its effect on their ability to obtain recordings as evidence in criminal cases.

The bill still allows for a civil suit if an officer seizes or destroys a recording without a person’s consent, but the person must first submit a claim to the law enforcement agency, with $500 set as the value of a recording. If that claim is denied, the owner of the recording could sue for the replacement value of the property and punitive damages of up to $15,000 if the denial “was made in bad faith.” 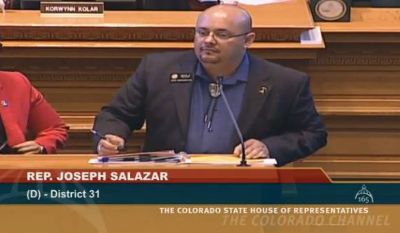 “This is about a citizen’s right to record police interactions as long as they don’t unlawfully record them,” the Thornton Democrat said. “Yes, we are talking about our most trusted public servants. But we’re also looking at video (of police) from across the nation and it’s happening quite often, including what happened in South Carolina with a police officer basically murdering a man.”

The language of the bill spells out a process for an officer to follow if he or she wants to obtain a recording made by a bystander. The officer would be required to provide identification, including badge number, and a “legal reason” for requesting the recording. If the person who made the recording doesn’t voluntarily give the device to the officer or consent to making an electronic copy, the officer may use other means “consistent with any policies and procedures of the law enforcement agency” to obtain the recording.

Under HB 15-1290, which now moves to the Senate, an officer could still temporarily seize a recording device if he or she believes it’s necessary to save a life or to prevent the destruction of evidence prior to getting a warrant.