A bill to require public disclosure of police internal affairs records cleared its first legislative hurdle Tuesday on a 7-4 vote in the House Judiciary Committee.

House Bill 18-1404, introduced by Democratic Rep. James Coleman of Denver, would open investigative files on an officer’s in-uniform or on-duty conduct once an investigation is complete and after any related criminal case has been decided.

“The major topic that we’re talking about here is accountability, truth and transparency,” testified Dan Montgomery, a former Westminster police chief who is now a consultant on police practices. “That’s what it’s all about. We also call that integrity.” 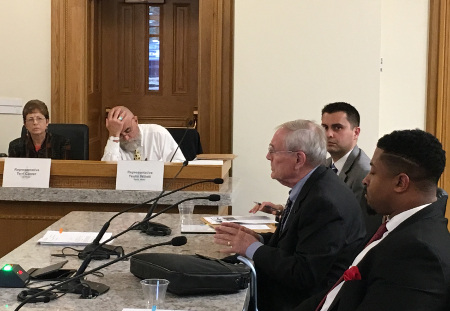 Montgomery told lawmakers he supports the bill , which would classify completed internal affairs files as “records of official actions” open for public inspection while allowing records custodians to redact private information and other information that could compromise the safety of officers, victims or informants.

Some chiefs of police testified against the measure as did a spokesman for the Colorado Municipal League and a lawyer for the Colorado Fraternal Order of Police. Donald Sisson, who represents the police officers’ group, contended that the current process for requesting internal affairs records under the Colorado Criminal Justice Records Act properly balances an officer’s privacy with the public interest in knowing about allegations against an officer.

But Rebecca Wallace, staff attorney for the American Civil Liberties Union of Colorado, pointed out that public records requests for internal affairs files are “summarily denied across the state,” except in Denver. She cited a recent study by a University of Denver law professor and her students which found that Coloradans are left “largely in the dark with regard to allegations and investigations of police misconduct.”

“In the end, we just can’t rely on the ACLU and a few government transparency attorneys to litigate their way out of this problem,” Wallace said. When law enforcement agencies have been sued for internal affairs records, “I can tell you that we win these cases,” she added. “When there is a closed file and closed criminal case, I have not found a case where we’ve lost. And yet you can never get the files without a lawsuit and it’s actually harder than it ever was.”

Opponents of the bill also argued that officers would be less inclined to cooperate with internal affairs investigations if they knew that records about a case would be made public and possibly used in news stories.

“Transparency is very important but so are the privacy interests of police officers,” Sisson said. “All I’m saying is there needs to be a balance. And by moving forward with this legislation, you undermine … that balance.”

Denise Maes, the ACLU’s public policy director, noted that the bill substantially conforms to Denver’s practice of releasing internal affairs files after first making detailed summaries available to the news media and public. She said the eventual release of records hasn’t changed Denver’s ability to recruit officers nor has it dissuaded Denver officers from participating in internal affairs investigations.

“That’s Denver. They’re doing it. The sky’s not falling. All is well,” Maes said.

The Colorado Freedom of Information Coalition supports HB 18-1404 as does the Colorado Press Association, Colorado Common Cause and the Independence Institute, a free-market think tank.

CFOIC President Steve Zansberg, testifying as the press association’s attorney, said the bill “will not hinder the mission of law enforcement. On the contrary, it will dramatically improve the public’s trust in their police departments and thereby enhance the performance of law enforcement.” He also told lawmakers that courts have uniformly held that police officers do not have an expectation of privacy with respect to records that reflect their official, on-duty conduct.

The bill, which is co-sponsored by Republican Rep. Dave Williams of Colorado Springs, now heads to the House floor.