A legislative effort to open records on police internal affairs investigations, or at least encourage their disclosure to the public, died Friday evening when the Senate sponsor of the bill had it killed in committee.

“I signed on as sponsor because in principle I like the idea,” Sen. Kevin Lundberg, R-Berthoud, told the Colorado Freedom of Information Coalition. “When it comes to police issues, there has to be accountability. But there’s a needle you have to thread to strike the right line.”

Lundberg said he didn’t see “common ground” between proponents and opponents of the bill with the 2018 legislative session ending next week, and Senate Republican leaders weren’t on board. 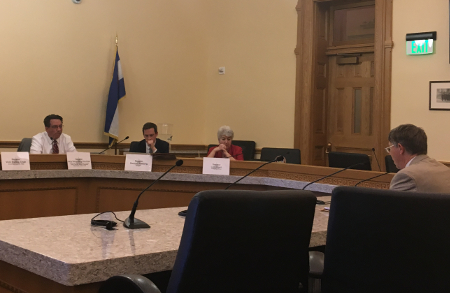 CFOIC supported House Bill 18-1404, pushed by by Rep. James Coleman, D-Denver. As introduced and <href=”http: coloradofoic.org=”” lawmakers-advance-bill-to-open-records-on-completed-police-internal-affairs-investigations=”” “=”” target=”_blank” rel=”noopener”>passed by a House committee, the bill would have required public disclosure of internal investigative files on an officer’s in-uniform or on-duty conduct once an investigation is complete, while allowing records custodians to redact certain information.</href=”http:>

With police and sheriffs against the measure, the House passed a weakened version that no longer required disclosure of internal affairs files but established a set of guiding principles and had records custodians do what the Colorado Supreme Court mandated in 2005 – conduct a balancing test before determining that the release of an internal affairs record would be “contrary to the public interest” under the Colorado Criminal Justice Records Act.

But those revisions weren’t enough to save the bill, the need for which was spelled out in a recent University of Denver law school study. It found that most police and sheriff’s departments routinely reject public records requests for internal affairs files, leaving Coloradans “largely in the dark with regard to allegations and investigations of police misconduct.”

“We have no transparency or accountability regarding internal affairs investigations of police officers, and it’s going to stay that way” because HB 18-1404 failed, said Rebecca Wallace, staff attorney for the American Civil Liberties Union of Colorado.

“But stay tuned for next year,” Wallace added, vowing to keep working on the issue.

Coleman told CFOIC the bill would have been “a really good opportunity to build trust between the community and law enforcement,” and he acknowledged feeling some frustration with the legislative process. Although stakeholders worked on the bill for months, it wasn’t introduced until late in the session and was perceived by some as rushed, he said.

The bill died in the Senate State, Veterans and Military Affairs Committee. Lundberg, who is term-limited, said he hopes somebody in the legislature keeps working on the issue.