A bill to modernize Colorado’s public records law survived a state House panel Monday night in a form closer to the way it was introduced earlier in the legislative session.

After a hearing that lasted more than five hours, the House Finance Committee removed a Senate amendment to Senate Bill 17-040 that was intended to make Colorado’s judicial branch subject to the Colorado Open Records Act (CORA).

The committee also undid another Senate amendment that would have allowed records custodians to withhold metadata, a term that is not defined in the bill but generally refers to information about other data. Instead, a new provision requires records requesters to specifically ask for metadata, which wouldn’t be released unless it is disclosable under CORA. 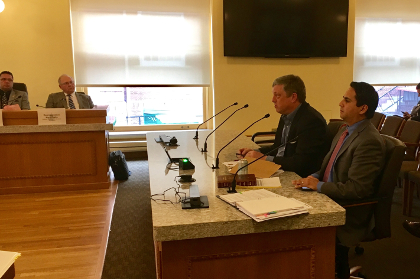 “You couldn’t just say, ‘Give me a document and all metadata associated with it,’” said Rep. Dan Pabon, the Denver Democrat sponsoring SB 17-040 in the House. “If you want metadata, you’ve got to specifically request it from a specific record and tell us what kind of metadata you’re requesting.”

By allowing the withholding of metadata, the Senate amendment could have prevented a records requester from obtaining, for instance, a record layout or a data dictionary needed to properly understand the public information kept in a database or spreadsheet.

Metadata also can refer to information embedded in a document. Records custodians asked for some restrictions on the requesting of metadata, worried the bill would force them to examine each bit of metadata in every document ever requested in a searchable format.

The goal of SB 17-040, which passed the Democratic-controlled House Finance Committee on a 7-6 party-line vote, is to clarify the public’s right to obtain digitized government records in useful file formats that make it easier to analyze the information contained in those records.

“This bill is the result of a very long process,” said Secretary of State Wayne Williams, whose office led the stakeholders’ working group (which included the Colorado Freedom of Information Coalition) that developed the legislation. “There is likely never a perfect bill that passes through, but this is a vast improvement over the existing law.”

Representatives of several state government departments and the University of Colorado testified against the bill.

Paul Ritzma, legal director for the state Department of Health Care Policy and Financing (HCPF), said SB 17-040 would require the department to scrub its vast databases, many of which contain personally identifying information not disclosable under CORA, of all fields of information except those few that must be released. Currently, he said, HCPF simply denies requests for all records from those databases.

Jeremy Hueth, CU’s managing legal counsel, said the bill would put the university’s databases “at risk.” He called SB 17-040 a “paradigm shift” that makes CORA an open-data law rather than an open-records law.

“When you’re talking about trying to impose an entirely new paradigm on the entirety of government with completely different systems,” Hueth said, “I think it’s really important to think through it carefully and what all the implications are to all of us and the way we operate. Because some of us think it would bankrupt us.”

Advancing the bill to the House Appropriations Committee, Democrats on the finance committee removed the judicial department provision over the objections of Republicans, including Rep. Polly Lawrence of Roxborough Park. She has tried unsuccessfully a couple of times to cover the branch’s administrative records under CORA.

The House Finance Committee also nixed another Senate amendment that would have allowed any current or former public employee to ask that his or her home address, personal telephone number or other identifying information be withheld from public records produced in a structured data or searchable format.

County assessors objected to that provision, originally proposed by the Colorado Attorney General’s office, because deleting the property records of current or former public employees would be “a massive undertaking,” Pabon said.

Pabon was successful in adding a “duty to confer” provision that requires records custodians and requesters to talk about large, complicated requests for records in structured-data formats.

Additional amendments to SB 17-040 are likely as the bill continues through the legislative process. Pabon couldn’t propose some of them Monday because House rules prohibit multi-page amendments unless committee members see them at least 24 hours in advance.