The Denver Department of Public Safety, which includes the police and sheriff’s departments, should publish written guidelines for releasing video of critical incidents such as the November 2015 death of jail inmate Michael Marshall, the city’s police monitor recommended this week.

In a 47-page report on the death of Marshall, independent monitor Nick Mitchell wrote that the lack of published guidelines “may have created unnecessary confusion or controversy about when the video of this incident would be released.” Guidelines, he suggested, would help the public understand how requests for video footage are evaluated and how decisions regarding release are made.

The recommendation is one of several in Mitchell’s report, which is highly critical of the way the Denver Sheriff Department handled the Marshall investigation. The medical examiner determined that Marshall, who had been arrested for trespassing, choked on vomit while being restrained by deputies. 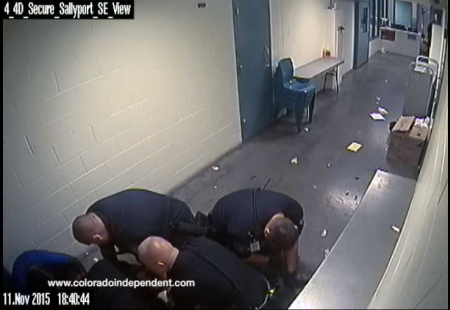 Footage of the jailhouse incident quickly became a point of contention. Demanding the city release the video, members of Marshall’s family went on a hunger strike. The Colorado Independent filed a lawsuit after the city denied the news organization’s request for the tapes under the Colorado Criminal Justice Records Act.

A few days later, Denver provided the surveillance video to Marshall’s family and then released more than 13 hours of footage from inside the jail.

“To build trust with the community, national standards recommend that departments should release relevant evidence as soon as possible after potentially controversial incidents like deaths in custody,” Mitchell’s report says. “In order to facilitate realistic public expectations, national best practices have recommended that law enforcement agencies publish written policies that provide guidelines for the request and release of such evidence.”

The report cites agencies in other states that require the release of video as soon as 72 hours or not later than 60 days after an incident. “Most policies include exceptions that allow video to be withheld if release will compromise an ongoing investigation,” it adds.

Mitchell wrote that Denver guidelines “should balance the need for prompt public transparency with the need for confidentiality during active investigations, among other factors. Recognizing that every critical incident is unique, the guidelines should explain, to the extent possible, the analytical framework (the department) will use in evaluating requests for the release of evidence of critical incidents.”

But in a response, included at the end of the report, Deputy Director of Safety Jess Vigil wrote that adopting such a policy “abdicates our responsibility” under Harris v. Denver Post, a 2005 Colorado Supreme Court decision that requires law enforcement agencies to balance several factors in determining whether to release criminal justice records.

Those factors include the privacy of individuals, the agency’s interest in keeping confidential information confidential and the public purpose to be served in allowing disclosure of the requested records.

“This requires a case by case review,” Vigil wrote. “… Since Colorado law specifically provides what the considerations should be, (the department) does not have a separate written policy.”