An amended bill endorsed by the Colorado House late Wednesday night no longer opens records on police internal affairs files, but essentially encourages their disclosure once an investigation is complete.

Approved on a preliminary voice vote, the completely rewritten version of House Bill 18-1404 would require law enforcement records custodians to do what the Colorado Supreme Court mandated in a 2005 decision – conduct a balancing test before determining that the release of an internal affairs record would be “contrary to the public interest” under the Colorado Criminal Justice Records Act (CCJRA).

The revised bill also establishes a set of principles for records custodians to use when performing the balancing test, declaring “there is a compelling public interest in public inspection of completed internal investigation files related to a peace officer’s on-duty or in-uniform conduct involving a member of the public.” 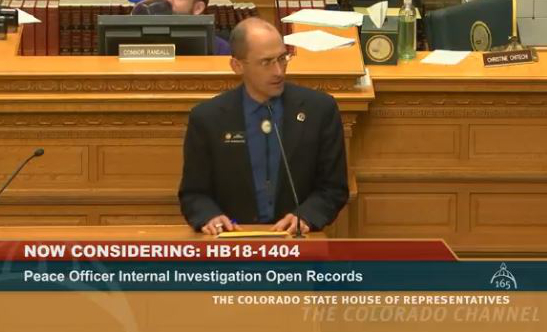 “Public access to internal investigation files enhances the effectiveness of internal investigations, rather than impairing them; and transparency enhances public confidence in the agency,” the measure states. Law enforcement officers, it adds, “do not have a legitimate expectation of privacy in on-duty or in-uniform conduct involving a member of the public.”

The new language is significantly weaker than the version of HB 18-1404 that passed the House Judiciary Committee about a week ago. That version, introduced by Rep. James Coleman, D-Denver, would have required public disclosure of internal investigative files on an officer’s in-uniform or on-duty conduct once an investigation is complete, while allowing records custodians to redact certain information.

The Colorado Freedom of Information Coalition supported the stronger bill along with the American Civil Liberties Union of Colorado, the Colorado Press Association, Colorado Common Cause and the Independence Institute.

But police chiefs, sheriffs and prosecutors opposed it, with some contending that law enforcement officers and witnesses would be less inclined to cooperate with internal affairs investigations if they knew that records about a case would be made public eventually.

The amended bill is “a different approach,” said Rep. Mike Weissman, the Aurora Democrat who helped Coleman draft the new language. He said it “simply provides some clarity on what public interest means and doesn’t mean … and what principles should guide a reviewing agency.”

Rep. Terri Carver, R-Colorado Springs, opposed the amendment, contending it “could be read by a court as mandating taking away the discretion of the custodian” to withhold internal affairs records. But Weissman said the premise of the amendment “is precisely that there not be a foreordained conclusion, that there should be individualized determination. It is not my intent to force an outcome. It is my intent that there be serious consideration given to some core principles that have been set forth in case law.”

Rep. Dave Williams, R-Colorado Springs, called the amended bill “a very good compromise” that addresses law enforcement’s concerns. “It still allows a custodian of records to deny these requests, but forces them to at least think twice as to why they’re doing it, to perform that balancing test and explain why they’re denying it,” he said.

The need for legislation was spelled out in a recent University of Denver law school study, which found that police departments and sheriff’s offices in Colorado routinely reject public record requests for internal affairs files, leaving Coloradans “largely in the dark with regard to allegations and investigations of police misconduct.”

Only the Denver Department of Public Safety regularly discloses internal affairs files, and that policy hasn’t changed Denver’s ability to recruit officers nor has it hindered internal affairs investigations, lawmakers were told in the committee hearing last week.

In determining whether to disclose police internal affairs records, the bill requires records custodians to weigh factors spelled out by the Colorado Supreme Court in Harris v. Denver Post for records subject to the CCJRA. These include the privacy of individuals, the public purpose to be served in allowing inspection of the records, the agency’s interest in keeping confidential information confidential, and the agency’s interest in pursuing ongoing investigations without compromising them.

If factors weigh against disclosure, records custodians should consider whether redaction would satisfy the “objective of disclosure while also addressing privacy concerns,” HB 18-1404 now says. It also instructs custodians to “redact sparingly in order to maximize the amount of information available to the public,” and it entitles requesters to a written explanation of the basis for a denial.

Finally, the bill would void any policy, rule or law that requires law enforcement agencies to deny all requests for records of closed internal investigations. This provision would bar blanket policies like those in effect in Aurora until recently. In a lawsuit settlement, the city agreed to change its policies.