The Colorado Freedom of Information Coalition on Thursday presented William Dean Singleton, chairman of The Denver Post and retired chairman of MediaNews Group Inc., with the Jean Otto Friend of Freedom Award for his sustained and significant record of fighting for open government in Colorado.

“Over the course of his career as the president and publisher of The Denver Post and other papers across the state, Dean Singleton never hesitated to challenge government secrecy and to hold public officials accountable,” said CFOIC President Steve Zansberg. “Whether it was the Columbine killers’ journals or the governor’s cell phone records, at every turn Dean fought vigorously to protect the public’s right to know.” 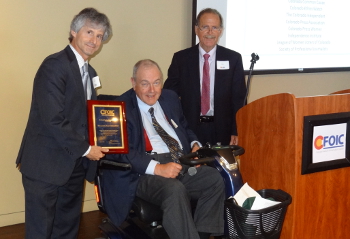 The award, presented at the History Colorado Center in Denver, honors the legacy of Jean Otto, a long-time editor and reader representative at the Rocky Mountain News who founded the CFOIC in 1987 and was a tireless advocate for First Amendment and freedom-of-information rights.

Singleton, 62, backed multiple open-records and access battles during his long tenure as Post publisher and chairman of Post owner MediaNews Group Inc.  One particularly high-profile court fight led to the precedent-setting release in 2006 of more than 900 pages of documents seized from the homes of Columbine High killers Dylan Klebold and Eric Harris, including diaries, day planners and school papers.

The Colorado Supreme Court agreed with The Post’s assertion that records held by Jefferson County sheriff’s investigators in the case were criminal-justice records and, therefore, subject to public release. Although the court left it up to the sheriff to determine which items would benefit the public by their disclosure, the decision firmly established the public’s right to see evidence seized by search warrant.

In another precedent-setting case earlier in the decade, The Post sued the developer of the former Stapleton International Airport property, arguing that the nonprofit corporation’s records were subject to the Colorado Open Records Act because it functioned as an agency of the city and county of Denver. The Colorado Court of Appeals agreed, ruling that governments are not allowed to sidestep the open-records law by delegating work to private entities.

In 2011, The Post found itself on the losing side of another long, vigorous court battle over an open-government issue – this time, the cell phone records of former Gov. Bill Ritter. The Post had sued Ritter in 2008 for an itemized list of calls Ritter made to discuss public business using his privately funded cell phone. In a 4-2 decision, the Colorado Supreme Court ruled the list was not a public record, setting a “bad precedent for transparency in government,” according to Post Editor Greg Moore.

Also during Singleton’s tenure, The Post fought for access to the autopsy report of JonBenét Ramsey and search warrant affidavits for John and Patsy Ramsey’s home. It  successfully sued (with the Associated Press) to unseal the indictment of Aaron Thompson in the case of his missing daughter, Aarone Thompson, and to unseal the arrest warrant affidavit for former Denver Bronco Perrish Cox, who eventually was found not guilty of sexual assault charges in Douglas County.

The Post also has been at the forefront of fights for access to numerous criminal proceedings, including the Oklahoma City bombing trials, sex assault allegations against Kobe Bryant and the Aurora movie theater shooting. The newspaper recently was part of a consortium (which included the CFOIC) that persuaded a judge to unseal transcripts in the case against death-row inmate Sir Mario Owens.

“A newspaper serves as the watchdog of all things in the community, but especially the government,” Singleton said as he accepted the award. “Without being that watchdog, democracy wouldn’t work.”

Whenever “there is an issue with making sure there is clear access to the facts, somehow I hear from Dean,” said Gov. John Hickenlooper, addressing the luncheon. “… This is the one place where there has never been any negotiation with Dean under any circumstances.”

In a video message, Sen. Mark Udall said he was pleased to help honor Singleton, whom he called “a champion of transparency and accountability.”

“Dean understands that despite the First Amendment’s guarantee of a free press, meeting the promise of our Bill of Rights isn’t easy – it takes hard work, determination and grit,” Udall said. Singleton, he added, has “made a career of supporting publications that shine light on government and how it affects Coloradans. “

In a letter, Sen. Michael Bennet said the award is a fitting tribute to Singleton’s “extraordinary commitment to transparency, open government and the principles and values that characterize Colorado and the West.”

A word from the new president: An exciting transition is upon us