State lawmakers moved a step closer Monday to letting the Colorado Division of Labor publicly disclose whether a company has cheated it workers.

HB 17-1021 won unanimous approval in the Senate Business, Labor and Technology Committee. The same committee killed a similar version of the bill last session after it had passed the House with bipartisan support. 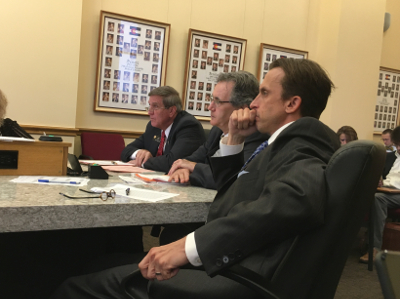 Sen. John Cooke, R-Greeley, (left) explains HB 17-1021. To his left are Patrick Teegarden of the Colorado Department of Labor and Employment and Larry Hudson, lobbyist for the Colorado Association of Commerce and Industry.

This year’s measure, approved by the House last month, now heads to the Senate floor for debate. If it becomes law, the state could no longer claim that a wage-law violation is a confidential “trade secret,” even after the employer has been investigated and a citation has been issued.

Under current law, “the public can never know about it,” said Sen. John Cooke, R-Greeley. “As a result, some of the bad actors are shielded and less likely to stop cheating their employees. Not only that, they are competing against companies that treat their workers fairly.”

Wage-theft violations include the failure to pay overtime and making an employee work off the clock.

The bill would make citation and assessment information in such cases available for inspection under the Colorado Open Records Act after an employer has exhausted all appeals. Before information is released, employers would have 20 days to object if they believe the documents actually do contain trade secrets that must be kept confidential under CORA.

The director of the Division of Labor then decides whether the records, or any portion of them, should be withheld from the public.

The division closed 3,401 wage-and-hour claims in 2016 and issued 274 citations. During the first two months of this year, it closed 663 claims and issued 134 citations.