The Colorado Senate endorsed a heavily amended version of the open-records modernization bill Tuesday evening, adding a broad exemption to bar the disclosure of records that “could endanger public safety or the operation of critical infrastructure.”

The new provision in SB 17-040, requested by Sen. Jerry Sonnenberg, would exclude such data from the definition of public records in the Colorado Open Records Act (CORA).

“It’s simply a security issue,” said Sonnenberg, a Sterling Republican. “Some will say this (information) is already exempt. Obviously, the water community and the utility community are still concerned.”

The amendment affects records concerning bridges, tunnels, dams, airports and other infrastructure systems. Sen. John Kefalas, the Fort Collins Democrat who introduced SB 17-040, called the provision “very broad” and expressed concerns that it could require the removal of maps and other records currently available to the public on the internet. 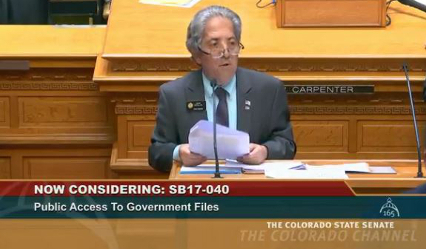 He also noted that the legislature passed laws after the 9/11 attacks to protect the safety and security of infrastructure information.

The bill, as introduced, was intended to clarify the public’s right to digitized government records in useful formats, such as spreadsheets. With some exceptions, it requires that records stored as structured data be provided to the public, if requested, in a similar format.

Kefalas said that SB 17-040, the product of a months-long stakeholders’ effort, tries to strike a balance between the public’s right to access government information and the protection of private and proprietary data. The original bill, he noted, was strictly about the format of records provided to requesters; it didn’t change any CORA exemptions.

But senators, concerned about cybersecurity and privacy, have added exemptions that could be broadly interpreted to withhold some records now available for public inspection. They also added an amendment to make the Colorado judicial branch subject to CORA, a provision that Kefalas tried unsuccessfully to remove Tuesday, knowing that House Democrats rejected a similar concept earlier this session and last year.

“It would compromise the independence of the judicial branch,” Kefalas argued.

“How in the world can we say that it’s OK to leave one branch out?” countered Sen. Ray Scott, R-Grand Junction.

Kefalas successfully proposed a change that removes a broadly worded committee amendment allowing custodians to deny requests for “any records the inspection of which is reasonably likely to compromise the safety and security of any natural person.”

Instead, a new amendment allows a current or former public employee to request that his or her home address, telephone number and other personal information be withheld from any public records made available in structured data or searchable formats.

This amendment “goes to the heart” of SB 17-040, said Sen. Bob Gardner, R-Colorado Springs. “It represents the best we have today to balance safety and security against transparency and accountability.”

The bill still contains other committee-approved provisions that could allow the withholding of metadata and other important documentation about public-records databases.

SB 17-040 faces a final Senate vote before it can move to the Colorado House.

Database of Colorado statutes will be free, state lawmakers decide

Harber: Transparency at the University of Colorado