A second attempt at boosting school board transparency this session won initial approval in the Colorado Senate on Tuesday.

SB 14-182, sponsored by Democratic Sen. Mary Hodge of Brighton, is a weaker version of an unsuccessful House bill that would have required the electronic recording of all portions of school board executive sessions, including attorney-client discussions.

The new measure merely adds the requirement that executive session minutes reflect the amount of time spent discussing each topic, in addition to a broad description of each topic as required under current law. The information would have to be posted on a board’s web site, or published some other way, no more than 10 days after the minutes are approved.

As amended Tuesday, SB 14-182 also would require that any electronic recordings of school board executive sessions be kept for at least 90 days.

“This is a reasonable compromise to make sure the public is informed, that there is transparency around what is happening behind closed doors,” said Sen. Andy Kerr, D-Lakewood. 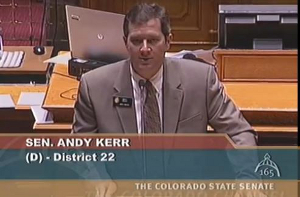 Both school board executive session bills were introduced because of a perception that some boards of education have held secret meetings in violation of Colorado’s Sunshine Law.

Also on Tuesday, the Senate Appropriations Committee passed SB 187, which would create a new commission to study and make recommendations for controlling health-care costs. Under the bill, up to five of of the commission’s 12 members could meet to review data without having to comply with the state Open Meetings Law.

A groundbreaking 2019 law opened records on police internal affairs investigations. The legislature could make the disciplinary process even more transparent.