Legislation to modernize Colorado’s open-records law underwent a significant makeover Tuesday night with a little more than a day left in the 2017 session.

The Colorado House gave preliminary approval to a completely reworked, shorter version of Senate Bill 17-040 designed to satisfy both records requesters and the government entities that have opposed the measure. 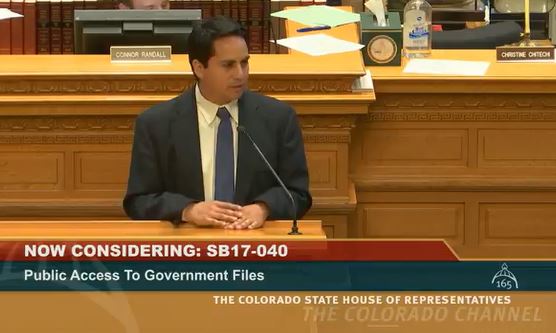 While the bill no longer references “structured data,” it is still intended to clarify the public’s right to obtain digitized government records in useful file formats that make it easier to analyze the information contained in those records.

Rep. Dan Pabon, the bill’s House sponsor, called the compromise “a modest approach” to updating the Colorado Open Records Act, and he signaled that more CORA updates are likely in future legislative sessions.

SB 17-040 now states that requesters, if they ask, are entitled to copies of “sortable” digital records in sortable formats. For example, they might receive a comma-separated-values file that can easily be imported into a spreadsheet.

If a public record is “searchable” but not sortable, the bill says, a government entity must provide a copy in a searchable format. That might be a searchable PDF.

As in the introduced version of SB 17-040, the removal of any information not disclosable under CORA would not constitute the creation of a new record. This provision is aimed at ensuring that entire datasets are not withheld because they contain some confidential fields.

The new version also lets records custodians withhold searchable or sortable copies if they determine it is not “technologically or practically feasible” to provide them. They must instead produce the records in an alternate format and explain in writing why they can’t provide the records in the requested format.

The amended bill should still remedy the type of CORA problem the Fort Collins Coloradoan faced two years ago when a reporter requested a faculty salary database from Colorado State University. Instead of providing a database or spreadsheet, CSU pointed the reporter to 145 printed pages on file in the university library.

As rewritten, SB 17-040 no longer includes Senate amendments that would have added new exemptions to CORA, such as allowing records custodians to withhold metadata and infrastructure security data. It also no longer tries to cover the state judicial branch under CORA, as some Republican senators wanted.

The House did add some language to a current CORA exemption that prohibits the disclosure of an individual’s medical information. The new language, requested by Denver Health, clarifies that an individual’s “electronic health records” may not be disclosed.

While government entities seem to have stopped their opposition to SB 17-040, there is no guarantee the Republican-controlled Senate will approve the new version after it faces a final vote Wednesday in the Democratic-controlled House.

What is the public entitled to know when a government board closes a meeting?