We wrote last month about one of the proposals, HB 15-1290, Rep. Joe Salazar’s plan to prohibit officers from interfering with anyone who lawfully records an arrest or any other incident involving cops. 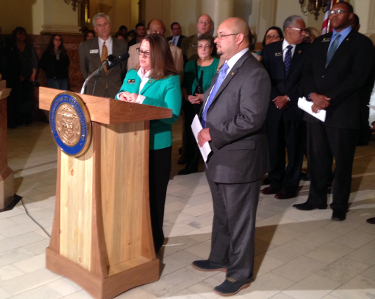 Another bill, HB 15-1285, creates a grant program for law enforcement agencies to purchase body cameras for officers. A study group would recommend policies on questions such as how long video footage is stored as well as who has access to the video and in what circumstances.

Under another measure, SB 15-219, a district attorney who declines to file criminal charges in an officer-involved shooting would have to disclose his or her reasons to the public. A fourth bill in the package of 10, SB 15-217, would require law enforcement agencies to provide the state Division of Criminal Justice with demographic data on officers and victims in police shootings and other information related to such incidents. This provision would be retroactive to 2010 and in effect until 2020.

“Our goal is to rebuild trust,” said Rep. Angela Williams, D-Denver, at a state Capitol news conference. “Our goal is to close the confidence gap that now exists between some law enforcement agencies and local communities. Our goal is to build public confidence in our police officers.”

The “Citizen’s Right to Record” bill proposed by Salazar, a Thornton Democrat, and Democratic Rep. Daneya Esgar of Pueblo would allow a civil suit against a law enforcement agency – possibly resulting in damages and a penalty of $15,000 – if an officer seizes or destroys a recording without a person’s consent, or if an officer interferes with a recording or retaliates against the person making it.

The measure was prompted in part by an incident last summer in which a Denver police officer punched an unarmed man in the face and tripped his pregnant girlfriend. A witness who recorded the arrest said police seized his tablet and later returned it to him with the video missing. The clip was still available, however, because it had been uploaded to the cloud.

Rep. Daniel Kagan, D-Cherry Hills Village, said his body cam bill is intended to settle some allegations of misconduct against law enforcement officers. “Body cams will help to exonerate a vast majority of police officers who do their extraordinarily difficult jobs extraordinarily well. It will also hold accountable those very few who do not. And those members of the public – very few – who make false claims will also be held to account.”

With body cameras becoming more widely used, police agencies across the country are struggling with the issue of access to footage. A pilot program in Seattle has police voluntarily uploading “blurry, silent” versions of body cam video to YouTube in an effort to release footage to the public while also protecting people’s privacy. The idea came from a police-sponsored hackathon after a computer programmer made a broad public records request for footage.

“It’s easy to get this wrong,” Kagan told the Colorado Freedom of Information Coalition. “We’re seeking to make sure we do this in a thoughtful way and get it right.”

A synopsis of all 10 bills in the package is available here.