A bipartisan trio of state lawmakers Tuesday announced plans for a bill that would require the Colorado Judicial Branch to ease access to its administrative records by using rules similar to those in the Colorado Open Records Act (CORA).

“All branches of government should be equally transparent to the citizens, with no branch held to a different standard,” said Rep. Polly Lawrence, R-Littleton, at a state Capitol news conference with Rep. Rhonda Fields, D-Aurora, and Rep. Yeulin Willett, R-Grand Junction. 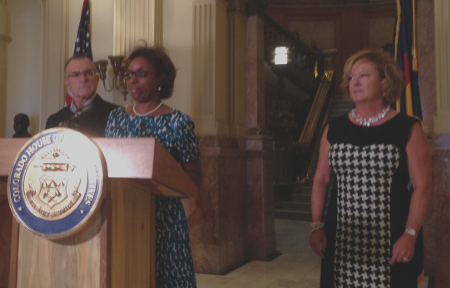 Because of two state court decisions, the judicial branch’s administrative records aren’t covered by CORA, which dictates access to records of the legislature and governor’s office, as well as those of all other political subdivisions in Colorado such as cities, counties and school districts.

The exemption has made it difficult for journalists and others to obtain information about the branch. The Office of the State Public Defender cited it as a reason for refusing requests from new organizations that wanted to know how much public money was spent to keep Aurora movie theater shooter James Holmes from the death penalty.

Fields said she’s curious about the public defender’s spending in the Holmes case and also wants to know how that office allocated public dollars to defend one of the men involved in the 2005 killing of her son, Javad Marshall-Fields, and his fiancée, Vivian Wolfe. During the trial, she said, it seemed like the public defender had more resources than the prosecutor, “but I can’t validate that because I don’t have access to that information.”

The judicial branch has been in the process of setting its own rules for access to its administrative records, and a public hearing is set for Oct. 1. Lawrence said the proposed rules include “an additional unnecessary level of confidentiality,” making the branch’s personnel records, for instance, mostly off limits.

Although not yet detailed, the 2016 legislation proposed by Lawrence, Fields and Willett would bring the branch’s personnel-record exemption in line with CORA. The open-records statute exempts only personal and private information such as home addresses, telephone numbers and financial data. All other information related to a public employee’s job performance generally is available if the public requests it.

Lawrence and Fields sponsored unsuccessful legislation during the 2015 session to make two judicial branch offices, the public defender and the Office of Alternate Defense Counsel, subject to CORA. That bill, HB 15-1101, died in the House Judiciary Committee after some Democrats argued that it unfairly targeted judicial branch offices that represent indigent people.

State Public Defender Doug Wilson recently penned a column defending his office as transparent and accountable. He wrote that Rule 1.6 of the Colorado Rules of Professional Conduct forbids him from revealing information about the representation of clients such as Holmes.

But Willett noted that expense records for the defense of Michael Blagg, accused of killing his wife in 2001, were found to be neither confidential nor privileged. CFOIC President Steve Zansberg made a similar argument in a column published this week in The Denver Post.

Rob McCallum, spokesman for the Colorado Judicial Branch, said the branch does not have a position yet on the proposed 2016 legislation.

The misdemeanor for violating CORA is going away on Aug. 9. Does that matter?