Colorado’s Sunshine Law is supposed to prevent more than two members of a local public body, such as a city council, from exchanging thoughts outside of a public meeting on matters related to their jobs as policymakers.

But Lakewood City Council members appear to be doing just that in a recent email provided to the Colorado Freedom of Information Coalition.

“Ramey, This is what Shakti provided to me, and she indicted (sic) last night that Charley was a yes on both. Dave has not weighed in yet. Regards, Barb,” the text of the March 10 message reads. 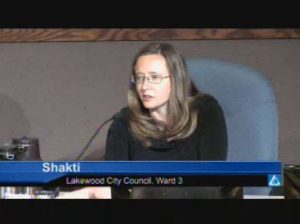 Shakti (who goes by one name) acknowledged that she individually polled other members’ interest in bringing certain subjects up at council meetings, but said she sent the results to just one other council member, Franks.

“I don’t know who she forwarded it to or whether there are issues with that,” Shakti said.

To Councilor David Wiechman, the email is proof that some members of the Lakewood council have secretly shared opinions on which matters deserve the full council’s attention and which ones don’t. He provided a copy of the email to the CFOIC.

“There’s a decision being made, but the public doesn’t know what that decision is or what the decision process is,” said Wiechman, who alleged in 2013 that Lakewood’s mayor and some councilors made decisions in private, in advance of council meetings.

What’s not allowed under the law, Beall said, is for three or more board members to share thoughts on policy matters via email, text, phone call or otherwise, unless they can find a way for the public to observe the process. While two council members may converse about a particular issue, they shouldn’t forward the discussion thread to a third council member.

And under the Sunshine Law, which declares that “the formation of public policy is public business and may not be conducted in secret,” meetings at which public business is discussed must be “open to the public at all times.”

“It’s hard for the public to attend an email meeting,” Beall said. “The practical answer is, you shouldn’t do it.”

Franks, reached Tuesday evening, said she asked Shakti for the tally and shared it with Johnson because Johnson had been interested in having study sessions on the issues of shopping carts left around communities and crime near a particular Wal-Mart. “By sharing that information with Councilor Johnson,” Franks said, “I thought I was increasing transparency because she did not have the benefit of the information, not doing something that I thought would be construed as a negative.”

Shakti told the CFOIC she knows that email meetings are subject to the Sunshine Law. She said, “You can’t have a group email with a group response” but doesn’t see a problem sharing her poll results with another council member. “Based on my understanding from talking to the lawyers, it’s perfectly fine to talk about how other people feel.”

But Councilor Charley Able said he saw a copy of the email and thought, “Someone has just documented an open-meetings violation.”

Able, a former Rocky Mountain News reporter who was elected last fall, said the public is entitled to know how the council sets its agenda. “My problem with it is we’re not being transparent,” he said. “The community should know not only what we agree to consider, but those things we refuse to consider. It’s just as important to the public’s right to know.”

If the poll results determined the council’s course of action, that might also violate the Sunshine Law’s secret ballots prohibition, Beall said. “It’s a fuzzy line, a nuance between building a coalition versus taking a vote.”

Shakti said the city manager and clerk set most of the council’s agenda and the remainder is determined by board officers based on suggestions from council members. She told the CFOIC the council is considering a new procedure that would let members suggest agenda items during public meetings.

“Then there would be a vote to move forward on those items with everyone in the room,” she said, “so we don’t have these complexities.”

Zansberg: Rules of Professional Conduct ‘have nothing to say’ about disclosure of police body-cam footage

Rangely police shooting: The truth emerges and the healing begins