One of the measures, SB 15-217, would create a process for publicly reporting information on officer-involved shootings.

It requires law enforcement agencies to provide the state Division of Criminal Justice with demographic data on both officers and suspects – including race, gender and ethnicity – as well as the sexual orientation of suspects. Among other collected information: the officer’s basis for stopping the suspect and the reason for the shooting.

Reports would be compiled on officer-involved shootings dating back to 2010 through 2020. They would be provided to state lawmakers and posted on the Division of Criminal Justice’s website.

Law enforcement officials told the Senate Judiciary Committee they currently collect the information requested in the bill but haven’t been asked to provide it to the state. Tom Raynes, executive director of the Colorado District Attorneys’ Council, cited the University of Colorado’s journalism school as one of the best statewide sources of data on officer-involved shootings.

“We’ve got to do better than that,” Raynes said. A project by CU News Corps counted 20 fatal shootings by police officers in Colorado in 2013. 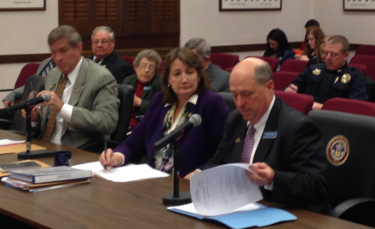 The Senate Judiciary Committee also approved SB 15-219. Among other things, it would require a district attorney who declines to file criminal charges in an officer-involved shooting to disclose his or her reasons to the public. The bills, both of which are sponsored by Republican Sen. Ellen Roberts of Durango and Republican Sen. John Cooke of Greeley, are supported by the state’s police chief and sheriff associations.

Two other police transparency bills are scheduled for hearings next week: HB 15-1290, which would prohibit officers from interfering with anyone who lawfully records an arrest or any other incident involving cops; and HB 15-1285, to create a grant program for law enforcement agencies to purchase body cameras for officers.