With Gov. John Hickenlooper’s signature Thursday on House Bill 17-1021, Colorado no longer will treat wage-law violations as “trade secrets” that must be kept from the public.

Under the state’s interpretation of a century-old law, it has been illegal for the Colorado Division of Labor to disclose whether an employer is found to have defrauded workers. This can include paying below minimum wage, failing to pay overtime or not reimbursing employees for expenses.

Records of such violations have been closed in Colorado, even after an investigation is over and a citation has been issued. 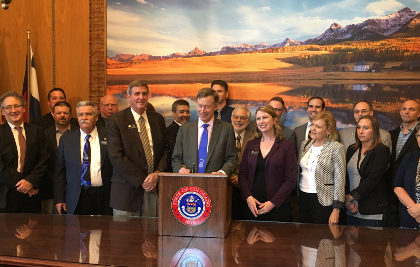 But that’s about to change because of bipartisan legislation sponsored by Democratic Rep. Jessie Danielson of Wheat Ridge and Republican Sen. John Cooke of Greeley. The new law makes citation and assessment information on wage-law violations available for inspection under the Colorado Open Records Act (CORA) after an employer has exhausted all appeals.

Danielson, who tried unsuccessfully to get the same measure passed last year, said in a statement that violators no longer will be shielded from public accountability.

“I wrote and sponsored this legislation because I believe cheating someone out of an honest day’s pay is wrong, and the public deserves to know when an employer is caught committing wage theft,” she said. “It’s a common sense way state government can help Coloradans who work hard and play by the rules.”

Rocky Mountain PBS reported on Colorado’s wage-theft secrecy in 2015. The strict confidentiality stemmed from a 1915 law on worker’s compensation which specified that information provided by employers “shall be for the exclusive use” of the state and “not be open to the public.”

The law later specified that wage-law violations “may” be treated as a “trade secret” and that state employees who divulge confidential information can be fined up to $1,000 and be disqualified from state employment.

The lack of access to information was seen as protecting employers who chronically violate wage-and-hour laws. Workers couldn’t know if a potential employer was known for cheating its employees. Likewise, consumers couldn’t know whether the businesses they frequent treat employers fairly or not.

Danielson negotiated new statutory language acceptable to state officials, labor advocates and business groups. Before citation and assessment information can be released under CORA, employers will have 20 days to object if they believe the documents actually do contain trade secrets that must be kept confidential. The director of the Division of Labor then determines whether the records, or any portion of them, should be withheld from the public.

The labor division closed 3,401 wage-and-hour claims in 2016 and issued 274 citations. During the first two months of this year, it closed 663 claims and issued 134 citations.