The Colorado Independent Ethics Commission on Monday put off making a decision on proposed records access rules after hearing opposition from news media associations, citizens and the Colorado Secretary of State’s office.

Rather than exempting itself from the Colorado Open Records Act (CORA), the IEC should “instead try to be a model for transparency and accountability in government,” said public policy consultant Peg Perl, who was senior counsel for the now-disbanded nonprofit watchdog Colorado Ethics Watch. 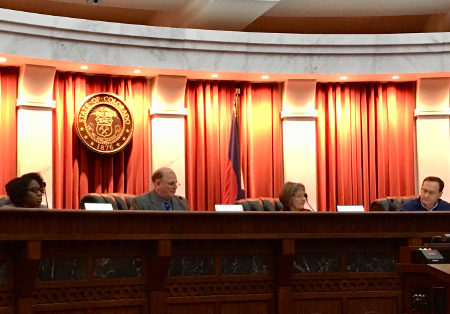 “The fact that your proposed rules provide less access to information than the plethora of other state and local agencies in our state offends public sensibilities,” added Jerry Raehal, CEO of the Colorado Press Association. “Given your specific role concerning governmental ethics, the proposal in general and its specific elements are both ironic and particularly troubling.”

The IEC, which investigates allegations of ethical misconduct involving public officials, considers itself exempt from CORA because it is housed in the state’s judicial branch, which itself is not subject to the state open records law. The IEC’s proposed records rules, announced last month, are designed to provide public access to the commission’s records “in the IEC context,” the commission’s executive director told the Colorado Freedom of Information Coalition.

But critics say the ethics commission, which was added to the state constitution by voters in 2006, is overstepping its authority.

The proposed rules are more restrictive than CORA in some ways. For one, they allow the commission’s records custodian to determine whether records will be provided to a requester “in print or electronic format.” That conflicts with a 2017 CORA amendment that entitles requesters to digital public records in “sortable” or “searchable” formats if the records are maintained that way.

“There is no legal precedent to support this new assertion of immunity from CORA by the Commission,” Perl wrote. “Indeed, past Commission practice and legal arguments have operated under the premise that the Commission is subject to CORA.”

In her testimony, Perl also noted that the commission “has basically defaulted to doing the least amount possible” to comply with transparency expectations, including not livestreaming meetings and not providing meeting packets to the public on the commission’s website.

One commissioner, William Leone, appeared to be surprised by the opposition. “This (proposal) seems to have engendered all kinds of controversy,” he said.

Commissioners said they may again discuss the proposed records rules at their March 5 meeting.