A possible amendment to a controversial bill on school board executive sessions would weaken a key provision which mandates the electronic recording of portions of closed-door meetings that currently aren’t recorded because attorney-client privilege has been claimed.

“It guts the bill,” said Sen. Mary Hodge, D-Brighton, of the proposed new wording being circulated among members of the Senate Judiciary Committee. The language, which she opposes, would allow boards of education to stop the recorder, as they can now, if the topic of an executive session involves real estate transactions, personnel issues, pending litigation or student-related matters. 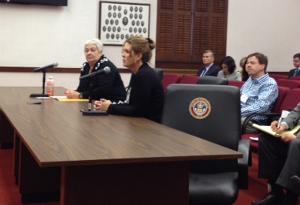 The Senate Judiciary Committee heard testimony Monday on HB 14-1110, which narrowly passed the Colorado House last month, but didn’t vote on the bill or any amendments.

Hodge and Rep. Cherylin Peniston, D-Westminster, introduced the measure because of a perception that some school boards around the state are meeting in executive session when they shouldn’t, in violation of Colorado’s Sunshine Law.

In addition to requiring the recording of all executive-session discussions with a board’s attorney, the bill would require that school boards maintain a log of topics addressed during privileged discussions and executive-session minutes would have to reflect the amount of time spent on each topic.

A recorded discussion could not be made public unless a judge, who is asked to listen, determines that the executive-session process was misused.

As they did in a House committee hearing, some residents of Jefferson and Douglas counties testified Monday that school boards in those districts appear to making important decisions behind closed doors. Cristin Patterson, a Douglas County parent, told judiciary committee members that her district’s board of education sometimes spends half of its meetings in executive session, presumably discussing matters which are then voted on in public “without any discussion.”

“We’re seeing so many things change and so many policies implemented with no discussion to the public,” Patterson said. “We just show up and find that things have changed, and we don’t know where the discussion around that has happened.”

Opponents of the bill, including the Colorado Association of School Boards, say the mandated recording of attorney-client discussions would chill a board’s ability to receive candid legal advice, knowing that a third party might hear it someday.

“Someone who is a convicted murderer sitting on death row could meet with their attorney and say whatever they wanted to say with that attorney and not be recorded,” said Sonje McKenzie, general counsel for the Cherry Creek School District. “Why should a school (board) have any less right to have a frank discussion with their attorney?”

“We don’t have room in our budget for spurious and litigious actions,” said John Sampson, a Strasburg school board member. He suggested a remedy for citizens who are not happy with their school boards: “Vote your board out. Vote in a board that is more responsive to the public.”

Sen. Michael Johnston, D-Denver, noted that the state Board of Education electronically records the entirety of its executive sessions, including privileged discussions with attorneys, “and they have not been ground to a legislative or litigation standstill.  They’re still doing business, operating, continuing to function.”