Journalists in Colorado would have stronger, but not absolute, protections against being compelled to reveal confidential sources and unreported information under an amendment to a reporter’s shield measure proposed by the bill’s sponsor.

Sen. Bernie Herpin, R-Colorado Springs, suggested the change after consulting the Colorado Attorney General’s office, the state public defender’s office and associations representing criminal and civil defense attorneys. All are concerned that SB 14-034 as drafted “would likely make it impossible to ever subpoena a news person even in the most extreme situations,” Herpin told members of the Senate Judiciary Committee on Wednesday.

The committee delayed a vote on the amendment and the bill to give the five members time to study Herpin’s revised language.

Under current law, Colorado journalists can be forced to testify about their reporting if three elements are established by “a preponderance of the evidence”: 1) the information is directly relevant to a substantial issue in a court proceeding; 2) the information cannot be obtained by any other “reasonable means”; and 3) the reason for the subpoena “outweighs” First Amendment interests. 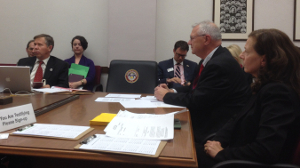 SB 14-034 would raise the standard of proof to “clear and convincing evidence,” which is harder to show. The bill as introduced also would have provided absolute protection from a subpoena when information is conveyed to journalists in confidence, but Herpin’s proposed amendment removes that provision. It also reinstates language that would have been deleted from the law requiring the balancing test between the reasons for the subpoena and a news person’s First Amendment concerns.

“While this does not provide the absolute protection to media sources that I intended when I asked for this bill to be written, it does add additional protections to the media and their sources by increasing the evidence level to clear and convincing,” Herpin said.

But Bridget Klauber, interim executive director of the Colorado Criminal Defense Bar, called the bill “a fix in search of a problem,” even with the proposed change. She said the current law adequately balances the interests of criminal defendants and civil litigants with protections for the news media. “There is no reason to tip the balance in the direction of the press when the balance is well thought out and sufficient,” Klauber said.

Herpin decided to sponsor SB 14-34 while following the ordeal of Fox News reporter Jana Winter last year. The New York-based journalist faced the possibility of jail time for not revealing the names of confidential law enforcement sources who told her about a notebook that Aurora movie theater gunman James Holmes had mailed to his psychiatrist. Holmes’ attorneys subpoenaed Winter to testify in Colorado, saying the unidentified officers had violated a judge’s gag order. But the New York Court of Appeals ruled Dec. 10 that New York’s shield law protects her from having to give up her sources.

In a statement Herpin read to the judiciary committee, Winter said that living under Holmes’ threat of subpoena was “a nightmare. I received harassing phone calls and was the subject of threatening Internet postings. My family and I were deeply distressed.”

Winter wrote that Holmes “succeeded in bringing ALL of my newsgathering efforts – on topics that had nothing to do with his case – to a halt. Dozens of individuals across the country who had previously worked with me to provide essential information on critical issues of public concern were suddenly unwilling to return my calls. Several of them specifically cited the proceedings against me in Colorado as the reason they no longer felt comfortable speaking to me.”

“Sources with access to information that could have contributed meaningfully to the public’s participation in our democracy decided, as a result of Holmes’ subpoena, that the risk was simply too great for them to come forward,” she added. “As a direct consequence, reports that I had been pursuing on issues of national security, terrorism and government corruption never saw the light of day, and the public went uninformed.”