Twenty Colorado nonprofits that spend public dollars to serve people with disabilities should be required like government agencies to provide detailed financial records and other information on request, parents and advocates told state lawmakers Monday.

“We’re not asking for more money from the state to care for our son,” said Darlene Beals, mother of 19-year-old Alan, who has Down Syndrome. “We’re asking for tools to check on community-centered boards for services already approved.” 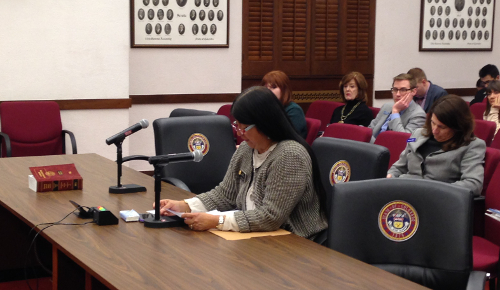 Under SB 16-038, community-centered boards (CCBs) receiving more than 75 percent of their annual funding from public sources would be subject to the Colorado Open Records Act (CORA). The bill, introduced By Sen. Irene Aguilar, D-Denver, also would have the State Auditor conduct performance audits of CCBs at least once every five years.

During Monday’s hearing in the Senate State, Veterans and Military Affairs Committee, parents expressed concerns about other CCBs as well, saying they can’t be sure taxpayer money is appropriately spent on services for their young and adult children.

But Laura Koch, who is president of the board of Lafayette-based CCB Imagine!, said that’s not true of her organization. While the situation with RMHS is “certainly unfortunate and unacceptable,” she said, Imagine! is “open and transparent with information about our services,” posting independent audits on its website and inviting the public to board meetings.

“There’s so much information already available but nobody ever looks at it,” said Koch, who has a 27-year-old daughter with developmental disabilities. “I don’t know why you need more.”

The Senate committee put off voting on SB 16-038 so that legislators can learn more about what sort of information on CCBs already is available by making open-records requests of the Colorado Department of Health Care Policy and Financing. HCPF, which is subject to CORA, contracts with the private nonprofit organizations.

Aguilar said taxpayers contribute about $290 million to CCBs each year. Each community-centered board gets at least 82 percent of its budget from public dollars, and some get as much as 94 percent from federal, state and local sources.

“The fact that they receive a supermajority of funding from our taxpayers and they’re not 100 percent transparent is concerning,” Aguilar said. “As legislators, I think it’s our responsibility to make sure Coloradans can feel confident in their government, and this common-sense bill is a step forward in that mission.”

What is a “reasonable” CORA fee?