With a weekly circulation of about 900, the Otis Telegraph serves several small towns in northeastern Colorado, providing news and information on everything from pothole problems to high school reunions. Co-publisher Jerry Patterson is known for the live storm videos he posts on the newspaper’s Facebook page.

“We call ourselves ‘The friendly voice of Washington County’ because we like promoting the community,” said Patterson, who was born and raised in Otis. “But every once in a while you have to step up and do things that papers are supposed to do. You have to ask the tough questions.”

A few weeks ago, Patterson asked about a May 1 executive session convened by the three-member Washington County Commission – specifically whether the closed-door meeting was legal under the Colorado Open Meetings Law. 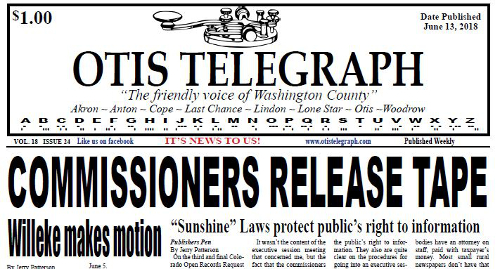 His questions led to a Colorado Open Records Act request for an audio recording of the executive session and the threat of a lawsuit after county officials twice refused to provide the tape. The county eventually backed down, and on June 13 the Otis Telegraph published a transcript of what the commissioners had discussed in private.

As Patterson suspected, the meeting had nothing to do with “determining positions relative to matters that may be subject to negotiations,” as Commissioners Terry Hart and Leland Willeke had announced before closing the door on May 1. Instead, it involved a public statement made on April 17 by the third commissioner, Lea Ann Laybourn, in which she accused her fellow board members of an “abuse of power” (Laybourn voted against the executive session motion and chose not to attend).

To properly convene an executive session under the state’s open meetings law, a local public body like a county commission is required to cite a statutory provision that authorizes the meeting and to identify the “particular matter to be discussed in as much detail as possible without compromising the purpose for which the executive session is authorized.” The public is supposed to be given some idea of what will be discussed in secret.

But the Washington County commissioners never announced “the particular matter to be discussed” in the closed-door meeting, nor did they mention any third party with whom the county was negotiating, wrote Colorado Press Association lawyer Steve Zansberg in the first of two letters sent to the county attorney on the Telegraph’s behalf.

“In other words, the county commissioners utterly failed to meet their obligations, as set forth in the Open Meetings Law, to provide the public in attendance on May 1 with the necessary information to understand the official actions of its governing body,” wrote Zansberg, who is president of the Colorado Freedom of Information Coalition.

In a second letter, dated June 4, Zansberg notified Washington County that the Otis Telegraph intended to go to court to seek release of the executive session recording. The next day, the county commissioners voted to release the tape.

“It wasn’t the content of the executive session meeting that concerned me, but the fact that the commissioners ignored the ‘Sunshine’ laws when making the motion to go into executive session,” Patterson told his readers in a column. The laws are on the books to “defend the public’s right to information,” he wrote.

Patterson told CFOIC that he and his wife Cheryl, the Telegraph’s co-publisher, were ready to sue, even though there was no guarantee they would recover what might have amounted to thousands of dollars in legal costs.

“We’re not a wealthy paper,” he said, recalling how he and Cheryl started the publication 20 years ago as a one-page newsletter they reproduced on a copying machine. “But I’m not one for making threats and not following up on them … We felt like we had a duty to our subscribers and our readers.”