Colorado’s Judicial Branch didn’t win this year’s Golden Padlock Award, which recognizes “the most secretive government agency or individual in the United States.”

But it was one of three runners-up.

The judicial branch deserved finalist status*, according to Missouri-based Investigative Reporters and Editors, for “shrouding in secrecy the conduct of some of the state’s most powerful and well-paid civil servants.”

The contest’s judges noted something that we’ve mentioned on this blog a few times: Because of two state court decisions, the judicial branch’s administrative records aren’t covered by the Colorado Open Records Act (CORA). Recently, that was a reason cited by the state public defender’s office for refusing requests from journalists who wanted to know how much public money was spent to keep Aurora movie theater shooter James Holmes from the death penalty. 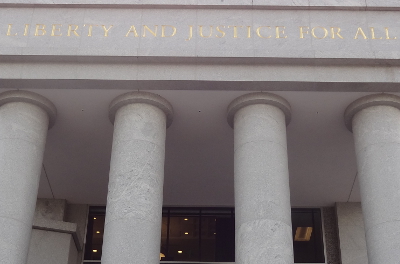 Over the past few months, the judicial branch has been in the process of setting its own rules for access to its administrative records. The Colorado Supreme Court accepted public comments through today on the rules, and a public hearing is set for Oct. 1.

The Colorado Freedom of Information Coalition submitted comments together with the Colorado Press Association and the Colorado Broadcasters Association. The comments were prepared by CFOIC President Steve Zansberg, a media lawyer who represents both groups of journalists.

Zansberg’s letter to the court expands on concerns raised last April, when the proposed rules were endorsed by the judicial branch’s Public Access Committee.

His letter focuses on how the rules differ significantly from CORA, which controls the release of legislative- and executive-branch records. That state law’s “time-tested guidelines,” the letter notes, appropriately balance “the competing public and private interests implicated whenever governmental records are subject to requests for public scrutiny.”

The definitions and exceptions in CORA should serve as “a presumptive baseline against which (the judicial) branch’s public records access rule should be assessed,” Zansberg’s letter says, adding that the public deserves a detailed response to the following question:

“Why should the records documenting the conduct of public business by employees and agents of this branch be treated differently from those of the other two branches of government (and of all the state’s political subdivisions)?”

One significant difference involves how CORA and the new judiciary rules define those portions of a state employee’s personnel file that must be kept confidential.

Under CORA, the personnel exemption applies only to personal and private information such as home addresses, telephone numbers and financial data. All other information related to a public employee’s job performance generally is available if the public requests it.

But the proposed judicial branch rules restrict the disclosure of most personnel information. If a judicial branch employee has been disciplined, for example, the public would not be entitled to know why. Nor would the public be entitled to “internal personnel investigation” records, which frequently are disclosed under CORA and the Colorado Criminal Justice Records Act, even when employees are not disciplined.

The judicial branch employs about 3,800 people in courts and probation, and many others in agencies such as the State Public Defender and the Office of the Child’s Representative.

Zansberg’s letter notes that two judicial branch offices are exempt from the new rules: the Colorado Commission on Judicial Discipline and the Independent Ethics Commission. ColoradoWatchdog.org reported last October that the judicial discipline commission had made public only three disciplinary cases against judges in its nearly 50-year history, and that the commission’s budget is mostly secret.

The letter raises other concerns with the new judicial branch rules. For one, the public would have no stated right to obtain copies of administrative records that are subject to inspection. For another, the rules do not cap research-and-retrieval fees, as CORA does. A third concern: The judicial branch would have 10 days to provide records; CORA allows three working days for records that aren’t readily available.

“Perhaps most troubling,” Zansberg wrote, is a provision that requires a records custodian in the judicial branch to deny inspection of any record “that is confidential by law, rule or order.” CORA requires the withholding of public records only if disclosure would be contrary to a state statute, rules promulgated by the Supreme Court or a court order. The “much broader language” in the judicial branch rules imply that an agency could set its own regulations for denying access to public records.

Even though the Supreme Court has yet to formally adopt the proposed judicial branch rules, the rules have been in effect since May under an interim directive issued by Chief Justice Nancy Rice.

*The Massachusetts State Police won the 2015 Golden Padlock Award for going to “extraordinary lengths to thwart public records requests, protect law enforcement officers and public officials who violate the law and block efforts to scrutinize how the department performs its duties.”

Modernizing CORA, Ralphie’s whereabouts and ‘a shot of tequila’: CFOIC looks back at 2017