Public access to records on employees of the Colorado Judicial Branch would be substantially more limited than what’s available regarding other state government workers under proposed rules endorsed Wednesday by a committee of the judiciary.

Because of two state court decisions, the judicial branch isn’t covered by the Colorado Open Records Act (CORA) and is setting its own regulations governing access to its administrative records. Several of the rules are in line with CORA, which covers the executive and legislative branches of government, but others deviate in significant ways.

CORA, for instance, narrowly defines those portions of a state employee’s personnel file that must be kept confidential. The exemption includes only personal and private information such as home addresses, telephone numbers and financial data. All other information related to a public employee’s job performance generally is available if the public requests it.

By contrast, the rules adopted by the judicial branch’s Public Access Committee make only a few employee records open for public inspection: salary, dates of employment, job title and description, the cover sheet of an evaluation and “the fact of a discipline.”

Under the new rules, if a judicial branch employee is investigated for wrongdoing, any internal files providing details of that investigation would be unavailable. 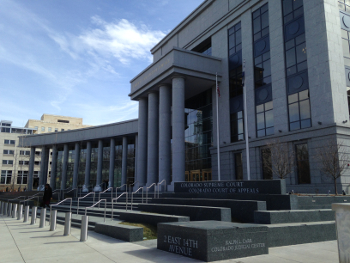 That isn’t the case under CORA or the Colorado Criminal Justice Records Act (CCJRA), the statute that dictates the public release of criminal justice records. For law enforcement officers, the Colorado Supreme Court in 2008 determined that internal affairs files can be made available for public inspection (and the CCJRA favors making such records available) with redactions, if necessary.

“Even in regard to law enforcement officers, the public is entitled to as much information as possible in those internal affairs files,” said Steve Zansberg, a media lawyer and president of the Colorado Freedom of Information Coalition. “With respect to judicial department employees, these records are expressly and entirely off limits.”

The question, Zansberg said, is why should the records of judicial branch employees be treated differently than those of other state government employees?

Teresa Taylor Tate, assistant legal counsel for the judicial branch, explained the differences between CORA and the proposed new rules by noting that the judiciary has “a variety of different personnel systems and a variety of personnel rules.” The branch employs 3,800 people in courts and probation, and many others in agencies such as the State Public Defender and the Office of the Child’s Representative.

Colorado Supreme Court Justice Monica Márquez, who chairs the Public Access Committee, said CORA was “a starting point” for the subcommittee that developed the new regulations, “but this was not intended to be an exact mirror of CORA…Judicial branch documents are unique in many ways and different in many ways from executive branch documents.”

The new judicial branch rules will cover all department agencies except for the Judicial Discipline Commission and the Independent Ethics Commission. Márquez said a public hearing on the new rules will be held in the fall before the high court formally adopts the rules. She added, however, that Chief Justice Nancy Rice likely will adopt a version of the rules approved Wednesday as an interim directive “as early as May 1.”

Some other provisions of the new rules also deviate from CORA. The rules say, for example, that “work product” documents must not be disclosed. These include “preliminary drafts and discussion copies of documents that express a decision, determination, or conclusion” by the judicial branch. Agencies covered by CORA waive that disclosure exemption when their final decisions make reference to work product documents.

Also different: The custodian of a judicial branch record has discretion to determine whether a record may be copied; there is no cap on charges for research and retrieval of documents; and custodians have seven calendar days to provide records (and another 14 calendar days if extenuating circumstances exist). CORA requires that records be made available for inspection immediately, if they are readily available, or within three working days (up to seven days for extenuating circumstances).

Denials of access, under the new provisions, can be appealed to a district court.

Watch: Elections officials answer your questions about voting in Colorado