This session, a school-spending transparency measure is part of HB 14-1292, one of two public education finance bills that passed the House on voice votes Wednesday. The funding package sets aside $5 million for the creation of a website that would detail school-level spending such as salary-and-benefit expenditures by job classification.

“As good stewards of our scarce resources in which our public has invested, it’s good policy to be open and transparent with how these dollars are being spent by districts and by our schools,” said Rep. Millie Hamner, D-Dillon, the House sponsor of HB 14-1292. 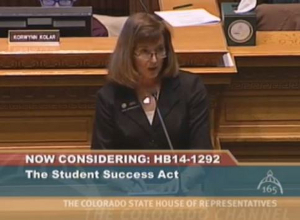 Responding to critics who said the transparency measure would be too burdensome for some school districts, Hamner successfully sponsored an amendment intended to minimize the impact on districts. For one thing, it no longer requires districts to break down centralized costs – such as a superintendent’s salary – by each school. And it limits reporting for smaller districts.

“We’re not against transparency,” Sonnenberg said. “I don’t know what else you want these school districts to do, for crying out loud.”

The House defeated an amendment by Rep. Jim Wilson, R-Salida, to soften reporting requirements for school districts. His proposal was similar to HB 14-1145, a bill he introduced that was assigned to the House Education Committee but hasn’t been scheduled for a hearing.

Gov. John Hickenlooper made education-spending transparency a priority during his state of the state address in January, asking lawmakers to “make the budget of every public school transparent.”

“Let’s put the numbers on the Internet and make the web a window,” the governor said.