For reporter Jana Winter, the notebook that James Holmes mailed to his psychiatrist hours before opening fire in an Aurora movie theater on July 20, 2012, is more than a chilling look inside the mind of a mass killer.

It’s the reason she lived for nearly two years under the threat of being jailed in Colorado.

Winter was a New York-based reporter for Fox News sent to cover the shooting rampage. Early on, she broke one of the most important stories of the investigation – the existence of the 34-page notebook, which was made public Wednesday as a critical piece of evidence in Holmes’ trial. 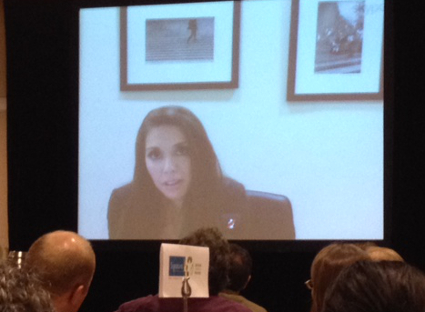 Her Fox News article, which is still online, was based on information told to Winter in confidence by law enforcement sources, including that the notebook contained “drawings of what he was going to do.” Holmes’ attorneys subpoenaed her to testify in Colorado, saying the unidentified officers had violated the presiding judge’s gag order. She refused to reveal her sources and could have ended up in jail if not for New York’s shield law, which provides journalists with absolute protection against being forced to reveal confidential sources.

The New York Court of Appeals ruled that New York’s shield law protected Winter from having to name her sources. Last May, the U.S. Supreme Court denied an appeal from Holmes’ lawyers.

“I’m grateful that Fox News fought for my right to publish critical newsworthy information from reliable confidential sources—and fought for two years to keep those sources confidential,” Winter said in an email Wednesday to the Colorado Freedom of Information Coalition.

Winter now works as a reporter for The Intercept, which publishes “fearless, adversarial journalism across a wide range of issues,” notably the documents provided by National Security Agency whistleblower Edward Snowden.

It’s worth noting that prosecutors in the Holmes case, who introduced passages from the notebook as evidence Tuesday, once characterized Winter’s Fox News report (and another story by NBC News) as “just another inaccurate media report floating adrift in a sea of inaccurate media reports relating to this case” and that “the media outlets reporting the information may have just made it up.”

Said Winter: “Today’s revelations in court demonstrate without a doubt that my reporting on the contents of James Holmes’ notebook was completely accurate. I feel totally vindicated in that respect.”

She added, “I think it was totally wrong that the lawyers in Colorado from both sides repeatedly tried to discredit the quality of my reporting in court motions and proceedings.”

During the 2014 session of the Colorado legislature, Winter’s ordeal prompted a state senator to introduce a bill to strengthen Colorado’s journalist shield law, making it more like New York’s. After the bill died in committee, Winter implored state lawmakers to reconsider the measure, speaking to the Colorado Press Association’s annual convention via Skype because her lawyers had advised her she might be “jeopardizing her freedom and risking imprisonment” by setting foot in Colorado.

Winter said Wednesday her lawyers still want her to stay away from Colorado until the Holmes trial is over.

“Your state really needs a better shield law. Insane that I still can’t go to the state of Colorado without risking my freedom.”

CFOIC’s year in review: Transparency highlights and lowlights from 2014